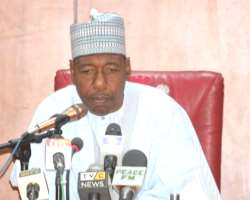 Governor Babagana Umara Zulum of Borno State has said that his government will soon organize economic summit to develop a blueprint for the economic recovery of the state as part of its post insurgency development strategies.

Professor Umara disclosed this when the Chairman of the Oriental Energy Group, Alhaji Muhammafu Indimi led a delegation on a courtesy visit to the Goverrnor at the Government House Maiduguri weekend

The governor added that, “We are going to conven economic summit to bring together stakeholders to develop a blueprint for development of the state".

He said ” 90 percent of our people are farmers our first task when we assumed office was to mobilized our farmers to go back to their farmlands.

"We supported them with farm impliments and cash to take advantage of the incoming rainy season. We also mobllized hunters, vigitantee and security operatives to ensure security and safety of our farmers.

” We are also going to conven education summit to develop an education plan in order to address out of school children. Thank God my predecessor, former Governor shettima had invested heavily in education ” Zulum said.

The Governor further said that the state government develop a deliberated and strategic plan to address the crisis caused by Boko Haram, as over 800 municipal buildings were destroyed, 511 classrooms, 241 health facilities and 106 water sources were also destroyed by the insurgents, as well as 49, 411 and 49, 633 were orphaned and became widows respectively by the insurgency in Borneo state alone.

Zulum while appreciating the chairman Oriented Energy, Alhaji Muhamnadu Idimi for conveying a retreat in Maiduguri, said that the retreat will give opportunity to his foreign partners and the world to know that Borno is safe and peace has returned.

He also assured the delegation that state government was ready to partner with Oriental Energy to move the state forward.

Earlier, the Chairman of the Oriental Energy, Alhaji Muhammad Indimi who spoke through his Vice chairman said they were in Maiduguri for a retreat and deemed it fit to come and pay him a courtesy call as honour and respect to constituted authority.