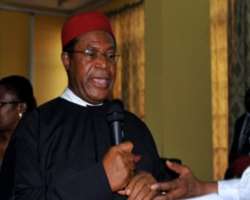 The crackdown on the forum was part of the resolutions adopted by the National Executive Committee (NEC) held on Thursday at the Headquarters of the party in Abuja.

The dissolution, according to the National Publicity Secretary of the party, Prof. Rufai Ahmed Alkali, was in line with the provisions of the party constitution.

Reform Forum had earlier said a proposal was submitted to the party for the amendment of the party’s constitution, but which NEC rejected.

"However, NEC also observed that Article 21 (j) discourages the existence of factions or members belonging to any group under the guise of the Party by whatever name called not being one provided for in the PDP Constitution. Accordingly, NEC resolved that the so called PDP Reform Forum stands dissolved and held that all members of the Party are free to submit proposals for the amendment of the Constitution but not under the name of any Forum unknown to the Constitution which clearly forbids members from forming factions under what ever name," NEC said.

NEC also re-admitted former Bayelsa State Governor Chief Depreye Alameseigha into the party following his application, as he was dismissed in 2005 after the courts found him guilty on charges of corruption.

"NEC also reviewed the case of the former Governor of Bayelsa State, Chief DSP Alamesiegha who was expelled from the Party in 2005. In view of his application to be readmitted into the Party, and having fulfilled the conditions set out in Article 10 (iii) of the Constitution of the Party, NEC accordingly approved his readmission into the Party," Alkali said.

As the new National Chairman of the party, Chief Okwesileze Nwodo formerly takes on saddle, he has reiterated his determination that the party under his leadership would endeavour to win the hearts of Nigerians in the coming elections rather than votes.

"We want to win the heart of Nigerians, we need to form government of the people. No government can work without the people and achieve its target," he posited.