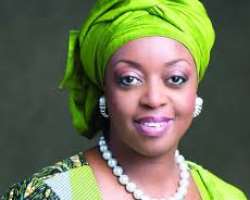 Both Imelda Marcus and Diezani Madueke share certain similarities. Apart from the fact that they are both women with great leadership abilities; they both know and understand how to use power to their advantage. The two women would have been rated women of substance if their insatiable appetite for materialism had not surpassed that of others.

For those who don’t know Imelda Marcus. She was the former first lady of the Philippines, who was born in 1930 to a prominent family in the Central Visayas in Leyte Province in the Philippine Islands. After winning a nation-wide beauty contest, she married Ferdinand Marcos, a rising political leader who later became president of the Philippines.

Imelda Marcos later became one of the most influential leaders of the Philippines. Much of her power came from her position as First Lady.

On her own, however, she cultivated an influential entourage who were loyal to her personally. This entourage included important economic, military, and political leaders of the country. Imelda Marcos fled with her husband to Hawaii early in 1986 after people revolted against corruption and dictatorship of Ferdinand Marcos. He along with his cronies was accused of embezzling $10bn from the Philippines. She left behind evidence of being a compulsive shopper for several items of apparel including a thousand pairs of shoes. Thus in the matter of a few weeks the image of Imelda Marcos changed from a haughty, imperial first lady of the Philippines to that of an almost ludicrous figure obsessed with material possessions

Imelda Marcos just like our own Diezani was known for flaunting her opulent lifestyle while her country languished in poverty and civil unrest. In June this year, President Rodrigo Duterte of Philippine approved the auction of (US$13.604 million) worth of jewelry seized decades ago from the former first lady Imelda Marcos. Imelda’s collection includes Indian diamonds, Burmese rubies, and Colombian emeralds. It also includes a rare, 25-carat pink diamond that was estimated to be worth millions of dollars. The collection has been stored inside a vault of Central Bank of the Philippines since the 1990s.

Also last week, Justice Nicholas Oweibo of the Federal High Court sitting in Ikoyi, Lagos, ordered the interim forfeiture of some pieces of jewelry and a customized gold iphone all valued at $40m belonging to Diezani Alison-Madueke, a former Minister of Petroleum Resources.

Diezani Madueke no doubt has had a brilliant career. She was the first female President of OPEC. She was elected at the 166th OPEC Ordinary meeting in Vienna on 27 November 2014. She became Nigeria's minister of transportation on 26 July 2007. She was moved to Mines and Steel Development in 2008 and in April 2010 was appointed Minister of Petroleum Resources.

Diezani Alison-Madueke has held three significant positions in the Nigerian federal government. She was appointed Transportation Minister in July 2007. On 23 December 2008, she became the Minister of Mines and Steel Development. When Vice-President; Goodluck Jonathan became acting President in February 2010, he dissolved the cabinet on 17 March 2010, and swore in a new cabinet on 6 April 2010 with Diezani Madueke as Minister for Petroleum Resources. Diezani Madueke has been accused of misappropriating Nigeria’s resources on many occasions. She was accused of diverting $6 billion (N1.2 trillion) from the Nigerian treasury. She has also been accused of $20 billion missing from the Petroleum agency.

She was accused of awarding multi-billion Naira contracts without recourse to due process and of recklessly spending government funds; as well as wasting billions of naira inappropriately on private jets. On 28 August 2017, a Nigerian federal court seized 7.6 billion naira ($21 million) from bank accounts linked to Diezani Madueke.

It is obvious that a deep-rooted discontent exists in the lives of both Imelda Marcos and our own Diezani Madueke. This has prevented them from experiencing personal contentment.

Today, we live in a society that promotes materialism. Unfortunately, we have started teaching our children that success and happiness in life should be measured with the material things you have. A competition has started among all age groups regarding brands and expensive things.

Our insatiable materialism seems more insane, since it is mostly directed at goods which aren't necessary for our survival and which we could easily live without. Our appetite for material goods is not driven by hardship, but by our own inner discontent.