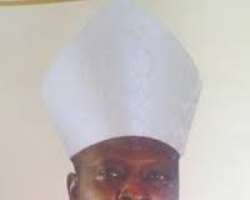 The Anglican Bishop of Afikpo Diocese, Ebonyi state, Rt. Rev. Paul Udogu has condemned in its entirety the federal government plan to establish Fulani herdsmen radion and alleged gift of N100billion to Miyetti Allah gang gives the impression that the herdsmen and their cows are treated as first class citizens.

He warned against revisiting the suspended RUGA settlement for herdsmen since the federal government may still reverse the suspension, warning that establishing it would cause crisis, war and possibly cause disintegration of the country.

In his presidential address/ charge at Good Shepherd Anglican Church Ozizza Afikpo, Ebonyi state during 1st session of the 5th synod of Afikpo Diocese, Udogu alleged that president Muhammadu Buhrai’s government have been treating herdsmen and cows as special class of people.

He condemned nefarious activities of armed herdsmen which he described as alarming and rising insecurity in the country and alleged that almost all the geopolitical zones of the country are under herdsmen's siege.

He therefore called on President Muhammadu Buhari to rise to the challenge before it becomes too late.

Udogu said “few days ago, we heard that the federal government has suspended RUGA . We know that when you suspend something today, you can come back to it tomorrow but we want to say without mincing words; enough of that policy is enough. In this country, we don’t want it.

“The directive to all Nigerians to surrender their guns to the police whether legally or illegally acquired is ambiguous and suspicious. Nigerians expect our security agencies to first disarm the Fulani herdsmen who are moving around with AK47 and other deadly weapons before asking innocent citizens to surrender arms . We do not advocate for illegal acquisition of arms but all over the world, people have right to self defense in case of unprovoked attacks.

“The federal government plan to establish Fulani herdsmen radio and the alleged gift of N100billion to Miyetti Allah gang gives the impression that the Fulanis are considered and treated as a special class while others are second class citizens. One wonders why such radio station was not established for IPOB members or for Niger Delta militants”.

The Bishop called on the National Assembly to consider the recommendations of 2014 National Conference and to revisit issues of restructuring the nation as way of ensuring justice and equity to various zones in the country.

He explained that a determined, sincere, sensitive, focused and unbiased leadership will stop the problems confronting the nation.