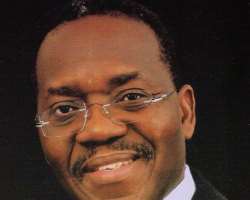 As the search for leadership succession intensifies in Bayelsa State, one thing is clear, Bayelsan stakeholders need a man with an accomplished track-record of service to the Community, State and Country. Bayelsa people need a person who will provide leadership that will cater for the interest and collective well-being of the people.

A critical evaluation, and x-raying the track records of some of the interested personalities, one person of impeccable track record in the public service and other areas of human endeavour, Ambassador Godknows Boladei Igali actually stands tall.

He also holds a Post Graduate Diploma from the Diplomatic Academy, Islamabad, Pakistan and studied at the Foreign Service Academy, as well as Bible Faith Training Centre both in Lagos.

He is a man of sterling qualities with high esteem in the diplomatic circle, the public service and other areas of endeavour owing to his enormous contributions in propagating the advancement of the common good for all.

He started his working career as a Foreign Affairs Officer with the Federal Ministry of Foreign Affairs in nineteen eighty-two and rose to the level of an Ambassador and has served in different parts of the world as a Diplomat where he exhibited exemplary commitment, creativity and selflessness in achieving targeted goals in the Nigeria’s foreign policy objectives.

In fact, the panache Ambassador Igali brought to leadership in all the offices he served has continued to receive accolades from within and outside Nigeria.

He was Consul-General to Cameroon from nineteen ninety-nine to two thousand and five, Secretary to the Bayelsa State Government between two thousand and six and thousand and seven as well as Honorary Adviser/Chief Negotiator to the President on Niger Delta Matters in the same year.

When Ambassador Igali was appointed Consul-General to Buea in Cameroon during the administration of Chief Olusegun Obasanjo, he saw it as an opportunity to bring a different style of leadership to promote the core diplomatic goals of the country, by putting the interest of the nation first.

As a young man in his late 30’s at the time of his assumption, he met a dilapidated Consular Office which was not conducive to carry out government business and was not also befitting in relation to the status of Nigeria as a leading nation in Africa.

He therefore embarked upon the construction of two new buildings, the residence of the Consul-General and Consular Staff Quarters, as well as the renovation of the Consular Office which were completed in record time.

After the ruling, Ambassador Igali successfully negotiated and initiated the return of thousands of Nigerians who were displaced in Cameroon for several years in collaboration with the United Nations High Commission for Refugees.

Incidentally, when thirty five Nigerian fishermen from Cross River State were captured by the Cameroonian authorities in the international waters of the Bakassi Peninsula, he promptly and successfully negotiated their release and eventual hand over.

As Consul-General in Cameroon, Ambassador Igali also contributed immensely to human capital development through collaboration with the then governor of Bayelsa State in training over one hundred Bayelsa youths in different vocational skills.

Ambassador Igali is a well published author who has contributed to many areas of academic scholarship.

Some of his published books include: Global Trends in State Formation: An Enquiry Into the Origin, Survival and Demise of States; Perspectives on Nation-State Formation in Contemporary Africa; The Truth of God’s Blessings; and Signposts to Success.

His book; Perspectives on Nation-State Formation in Contemporary Africa was bestowed the Gold Seal Award of Literary Excellence in the United States under the US Review of Books and in two thousand and twelve, he was honoured by the University of Port Harcourt as the eminent lecturer at its 1st Founders Day Lectures.

As the Chairman, Governing Board of the University’s Institute of Natural Resources, Environment and Sustainable Development, Doctor Igali also chaired the first International Conference on Deltas in Africa at the University of Port Harcourt between fourteen to sixteen October, two thousand and fifteen where critical issues relating to sustainability of deltas, climate change, environmental pollution, natural resources management, and security, especially in the Niger Delta and Gulf of Guinea were discussed.

He has presented countless number of public lectures at different fora and was awarded Officer of the Order of the Niger by President Olusegun Obasanjo in two thousand and six and is a Fellow of the Nigerian Association of Hydrogeologists, Institute of Chartered Administrators and Researchers of Nigeria, and the Historical Society of Nigeria.

With such a pedigree, Dr. Igali has demonstrated robust leadership at both domestic and the international theatre. Now that Bayelsans are frantically searching for a worthy Ijaw son to succeed Governor Seriake Dickson, it will not be out of place for stakeholders to gaze at the direction of Boladei Igali.

This also serves as a clarion call for Bayelsans to ensure they select persons of proven integrity and track-record of excellence for the top-job of governing the State.

This is therefore a clarion call for all Bayelsans across party lines interested in the accelerated development of the state to rally round Amb. Boladei Igali to clinch this exalted position where he would bring his experience to bear in moving the state to an unprecedented level of socio-economic development.

Viewed as a leader, Dr. Igali parades pragmatic qualities in negotiation, persuasion and influencing people towards the desired goal. As a technocrat, he has played immense role in reconfiguring governance culture. In the realm of service, Igali has served community, state and country.

The consensus of opinion is that Dr. Boladei Igali has all it takes to govern Bayelsa State and stakeholders are aware of the leadership qualities he has demonstrated.

The geopolitics of Bayelsa State and the rotational principle that has always guided power sharing and the allocation of scarce values favour the Governorship of the vintage Ambassador Boladei Igali. Bayelsans are only looking forward for the scion of the State to be sworn-in as Governor come February, 2020.