Restructuring: When one house is better than two! 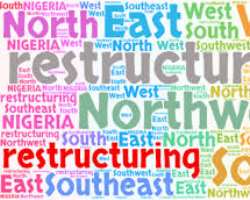 Throughout his sojourn at the National Assembly, former senate president, Dr. Bukola Saraki never saw anything immoral in expending one-quarter of the federal budget on fuelling the false lifestyle of lawmakers and their hangers-on. In fact, when he executed the presidency of the Senate, Dr, Saraki consistently defended the misnomer and serially gibed at whoever questioned the expenditure of the National Assembly. That is as it should be!

Then, Dr. Saraki suddenly ’saw the light’, or so it seemed, after he failed to secure re-election! In a typical about-face, made even more remarkable by its quirkiness, the former senate president found his voice 24 hours after the inauguration of the ninth National Assembly when he traitorously called on the Assembly’s new leadership to make public the monthly take-home of senators! The treacherous challenge had an unintended effect as it has heightened the debate over the irrationality of running double-chamber legislatures, especially in budding democracies!

Former president, Olusegun Obasanjo, can best be described as an impossible neighbour to have next door. His eight-year rule has been has been described, even by his die-hard fans, as an avoidable and costly mistake. But like all mortals, President Obasanjo has his good sides too. One of his major contributions to constitution making in Nigeria, which cannot be denied even by the harshest Obasanjo-basher, is the robust case he made more than three decades ago for a unicameral or, single-chamber legislature.

President Obasanjo literally hit the bulls’ eye when he argued then, in one of his several books, that a bi-cameral or, double chamber parliament is unwieldy and wasteful for developing countries. Pity is that on two different occasions, Chief Obasanjo had the opportunity to make the difference but demurred on both occasions. It remains inexplicable, and painfully so, that he had the opportunity to make amends in his second coming in 1999 but blew it in pursuit of a wrongheaded tenure extension plan.

There appears to be one major advertised benefit for double-chamber parliaments; according to its proponents, it allows for checks and balances. The impression one gets is that the upper house, supposedly made up of ‘cool, level headed’ serves as a check on the supposed excesses of their supposedly ‘hot headed’ juniors in the lower house. But that is where the attraction ends. Aside being financial sink holes, what obtains in most African parliaments is duplication of roles and functions.

Nigeria has two unwieldy, often-bickering and scandal-prone houses in its National Assembly with some four hundred and sixty nine federal legislators that gulps one quarter of the federal budget. A reasonable representation, you will agree, for a country with a population estimated at two hundred million. The snag here is that spending one quarter of the federal budget the drive the false life style of a few is an unreasonable expenditure profile in a vast plain of poor, struggling people.

If the need for checks and balances is the main benefit of a double-chamber legislature, perhaps that aim would have been better achieved through a single-chamber assembly with a good mix of the supposed cool headed and supposed hot headed. To better achieve this, and still illustrating with Nigeria, the present 350 federal constituencies could be retained. Since the cost of running the National Assembly is unacceptably high, these federal legislators should operate purely on part time basis and be paid sitting allowances.

This is about the only way to bait professionals to come into the National Assembly, as the parliament is called in Nigeria, without having to abandon their professional callings and without having take politics as full time business as is the practice today. Of course, there should be constitutional provisions to take care of special and under-represented groups such as the physically challenged, women, labour and youth groups.

Though there has been instances where some former ministers in Ghana say the arrangement could be taxing and should be reviewed, there is nothing to show that the arrangement is about to be jettisoned because it is working. Perhaps, those who criticise the Ghana arrangement should pause and reflect on Nigeria where unelectable people are rewarded with cabinet positions.

Aside saving cost, a single-chamber National Assembly which has space for special and under- represented groups could be made even more cost-efficient if lawmakers operate part- time and receive sitting allowances. The present money guzzling National Assembly which many consider a fast route to instant wealth does not encourage professionals and serious-minded Nigerians to offer their services. Any way it is looked at, the subsisting arrangement excludes some of the best brains whose professional background could enhance lawmaking and enrich our laws.

We should not delude ourselves that restructuring the National Assembly will be a picnic. With a legislature filled with some of the highest-paid lawmakers in the world, it is to be expected that not a few lawmakers and their hangers-on will balk at the idea of a unicameral legislature that will most certainly lead to job losses. So, for how long will ever-struggling and ever-murmuring Nigerians continue to sneer at, and excoriate the false lifestyle of, their representatives?

It is n ongoing debate. And as the debate rages, we can only continue to din the agitation for a single-chamber legislature until, hopefully, it gets the ear of the progressive wing of the National Assembly. Until then, the exciting question remains: do we, in all honesty, need two chambers in the National Assembly?