Onaiyekan: Ominous, dangerous clouds of destabilisation hovering on the horizon of Nigeria 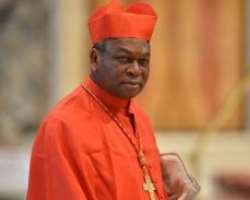 John Cardinal Onaiyekan has called on the Federal Government to defuse the tension that had arisen in the country in recent times, restore peace and security.

Onaiyekan made this call during the Opening/Welcome Dinner of the Second Edition of the Cardinal Onaiyekan Foundation for Peace (COFP) 2019/2020 Fellowship Programme on “Interreligious Dialogue and Mediation Certificate Programme'' in Abuja on Monday.

“As we all gather here in this peaceful environment, we cannot but draw attention, with grave concern to the ominous and dangerous clouds of destabilisation hovering on the horizon of our nation.

“As a matter of fact, this had been gathering for quite sometime, but it has reached a high pitch in recent weeks.

” It will appear that this is following on some announcement or mere rumours of certain controversial plans of the Federal Government that has been greeted with strong and loud oppositions from many sectors of the nation.

“This goes beyond frightful unconstructive statements on social media bordering on declaration of war. In the name of God and for the common good and future of our nation, this should not be allowed to continue to fester.

“The primary responsibility to defuse this tension and restore peace rests with the government, which must listen to the deeply felt complaints of all citizens, ” he said

The Cardinal said it was also a time for all lovers of peace to stand up and speak out loudly for peace, harmony and justice in the nation.

He urged religious leaders to make efforts to eschew all forms of religious fanaticism, which rejected others and created fertile ground for violent extremism to grow and thrive.

According to him, religion in their diversities should no longer be considered as a problem to be solved but as an asset to deploy for the good of humanity.

Rev. Sister Agatha Chikelue, Eecutive Director, COFP, said the purpose of introducing the programme was to effectively empower religious men, women and youths with skills in dialogue negotiation and mediation.

Chikelue said the programme aims at uniting people across divides so that they could work together to find solutions, overcome divisions, build common ground and promote peace in their various communities.

One of the fellows, Mrs Mary Gonsum, Arch Diocesan President of Catholic Women Organisation, Jos, commended the efforts of the foundation, saying it was not easy bringing together people of different faiths.

Gonsum said she hoped at the end of the fellowship, God will grant her the stamina to preach the message of peace of Christ.

Another fellow, Abdulmalik, Abdullahi , Researcher and Trainer with DAWA Institute of Nigeria Islamic Education Trust, Minna, said he applied for the fellowship to learn more on dialogue and mediation so as to foster peace in his community.

Abdullahi stressed the need to live in peace and unity, while appreciating each others' differences was key in daily life experiences.

“I am here in order to learn how to relate with people of other faiths, appreciate what they believe in so as to live with them peacefully.

One of the pioneer fellows, Mr Cyril Edebe, said that he established an Interfaith Teenagers for Peace (ITP) organisation as a result of the fellowship programme.

Edebe said he set up the organisation because he realised teenagers were not included as peace builders.

He said some of the activities of the organisation include a peace club, which met once a month, adding that he planned to organise a peace summit for teenagers that would cover the six area Councils in the FCT.

The 35 fellows are religious leaders and civil groups drawn from the six geo-political zones of the country.

The fellowship programme is supported by GHR Foundation based in the U.S. and the German Embassy.

Other partners include the Tony Blair Foundation for Global Change, VERITAS University, Islamic Education Trust, Institute for Peace and Conflict Resolution and Interfaith Mediation Centre among others