Parties in arbitration must abide by errors they made, condoned - Supreme Court 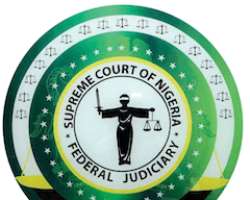 The Supreme Court has held that since parties in a contract are bound by the terms of their contract, they must also be bound by errors and mistakes they made, condoned and invariably waived.

The apex court made the pronouncement while delivering a judgement in an appeal emanating from an arbitration dispute between Dr. Charles Mekwunye and Christian Imoukhuede wherein the Court of Appeal had nullified an arbitrary award a tenancy arbitration agreement between the parties on the basis of an error in the agreement.

Dr. Mekwunye had in 2006 dragged Imoukhuede before an abritration panel over a tenancy dispute between them. After the arbitration panel delivered its judgment in favour of Mekwunye, Imoukhuede approached the High Court of Lagos

to nullify the arbitrary award which the High Court refused.

He further approached the Court of Appeal seeking to nullify the decision on several groundings including that there was an error in the arbitration agreement.

Imoukhude through his lawyers contended at the lower court, that while part of the arbitration clause in the tenancy agreement had stipulated that any dispute between parties must be settled by Chartered Institute of Arbitrators London, Nigeria branch, there was no such known body as the only Arbitration body then was Chartered Institute of Arbitrators, UK, Nigeria branch.

In its decision, the Court of Appeal giving a literally meaning to the interpretation of the clause, allowed the appeal and reverse the earlier decision of the arbitration panel affirmed by the High Court.

But the Supreme Court in a unanimous decision by all five Justices held that since parties in a contract are bound by the terms of their contract, they must also be bound by errors and mistakes they have condoned and waived.

In her concurring judgment, Justice Mary Peter-Odili said, " The argument is that “the Chartered Institute of Arbitrators, London, Nigeria Chapter” is non-existent, making the referral to a non-existent body unenforceable. Indeed, parties are bound by their contract. However, where such terms or expression will not be absurd or is unambiguous, the

intention of the parties is read into the contract.

"Furthermore, the Respondent was a party to the Tenancy Agreement and read same before appending his signature or subscribe to be bound by same. If he knew and believed that Chartered Institute of Arbitration London, Nigeria Chapter" was non-existent, why did he agree to be bound by same.

"I agree with the interpretation given by the trial court and I stand by it. Since parties are bound by the terms of their contracts, they must also be bound by errors and mistakes they have condoned and waived. The' error having been condoned by the respondent is part and parcel of their contract and shall be interpreted so by me."

The court held that the respondent conceded to the appointment of a sole arbitrator by partaking in the arbitration proceeding and cannot now turn around to challenge the decision of the arbitrator.

On the issue of whether the lower has power has the power to set aside an arbitral award, the apex court held that once all necessary conditions for the award of cost has been met by the arbitration panel, no court can nullify such award since parties willingly submitted themselves for arbitration.

The apex then affirmed the arbitrary award compelling Imoukhuede to pay same to Dr Mekwunye.