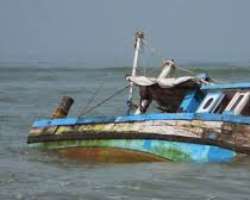 A boat conveying more than 20 persons suffered mishap at Egbin, near Ijede in Ikorodu area of Lagos State on Saturday night.

The boat was conveying passengers from Ajah to Egbin when the tragic incident occurred. The Lagos State Emergency Management Agency (LASEMA) attributed the incident to overloading.

The Chief Executive Officer of the agency, Olufemi Oke-Osanyintolu, said two corpses had been recovered while rescue operation was ongoing.

He said, “The boat allegedly capsized due to overloading. It was gathered that the boat was overturned by the heavy current three persons were rescued and were taken to hospital.

“Unfortunately, the lifeless body of an adult female, identified as Aniyikaye Oluwaseunfunmi, 40 years old and unnamed person were found and bagged by the agency’s response team.

“Rescue and recovery efforts continue for the other missing passengers by LASEMA, LASWA officials and the Marine Police.”