Police react to report of youths chasing away herdsmen from Enugu 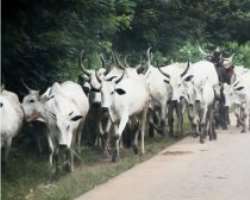 The Police in Enugu State have reacted to the report that some youths from Agbada Nenwe in Nkanu area of the state chased away herdsmen from their community.

A video that circulated online had claimed that the youths chased away the herders from their area on Saturday.

But in its response in a statement issued also on Saturday by the state Police Public Relations Officer (PPRO), SP Ebere Amaraizu, the force described the report as a handiwork of mischief makers and vowed to fish out originators of the report and bring them to book.

“The Enugu State command of the Nigeria police force wishes to inform members of the public that its attention has been drawn to information in existence that large herd of cows and some herders were escorted peacefully out of Nenwe, Aninri community of Enugu State on 29/6/19 by youths believed to be from Agbada Nenwe.

“The Police wish to update members of the public who may have been misinformed with the state of things.

“On receipt of this information, the state commissioner of police directed for an investigation into the alleged development and following preliminary enquiry conducted, it was revealed that such situation never existed and that it was only the movement of cattle and herders from Cross River State, through Uburu in Ohaozara Local Government area of Ebonyi State, and a neighboring town for grazing.

“The said piece of information in circulation is viewed to be the handiwork of mischief makers who want to brew rancour, cause panic and fear and also sow seed of acrimony as well as instigating violence.

“The command has already commenced action with a view to identifying and fishing out those in the habit of mischievous information so that they can be brought to book. The commissioner of police enjoins all to be law abiding and go about their normal lawful businesses,” the police statement read.