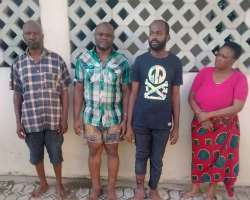 A 34-year-old man, Iwueze Kingsley, has been arrested by operatives of the Inspector General of Police Intelligence Response Team IRT in Lagos for stealing a car and other valuables belonging to an Uber driver.

The suspect had lured his unsuspecting victim named Clifford Echereode to a bar in the FESTAC area of Lagos on the night of April 22, 2019 under the pretence of needing his taxi service.

According to Sources at IRT led by Deputy Commissioner of Police, Abba Kyari, Kingsley approached Echereode to pick up his brother, who he claimed was returning to Nigeria from Ghana that night.

But moments after engaging his service, the suspect, pretending to be nice, persuaded the victim to follow him to the said bar to take some drinks and barbecued meat, popularly known as suya, while they waited for a few more minutes before heading to the airport.

Upon getting to the place, Kingsley, who had perfected his plan, offered the driver the suya he had already laced with a drug known as ‘Xxxxx’. (Not real name)

The taxi driver soon dozed off, allowing the suspect to escape with his Toyota Corolla car marked GGG 720 FK, an Infinix android smartphone and other valuables.

Upon receiving a complaint from the victim, IRT Operatives Led by DCP Kyari based on credible intelligence, swung into action, tracked and arrested Kingsley.

While being interrogated, the suspect confessed to the crime, revealing the activities of his gang and their mode of operation.

He disclosed that after applying the sedative on the food or drink of their victims, they take their vehicles to the Eastern part of the country where it is sold by one of the members.

Following his confession, the police were able to also arrest other members of the notorious syndicate including Moses Ugwu, Ugwoueke Euphemia and Onyebuchi Odoh, who receives the stolen items before they are sold.

Disclosing how he got into crime, Kingsley, who claims to be a National Diploma certificate holder in Public Administration from the Federal Polytechnic, Nekede, Imo State, said he never thought he could be arrested soon by the polic

He said, “In 2017, I got a job with UBA after initially being sacked while working as a driver for Ecobank. I was earning N50,000 every month at UBA and was satisfied with that until Moses Ugwu asked me to stop.

“He told me that there were better ways we could make quick money. He started by giving me fairly used cars to sell and after selling, he would give me N50,000.

“One weekend, he calls and asked me to look for a clean car for him, that he had a business meeting in Lagos.

“I got him a Toyota Corolla being used for Uber and waited for him at the airport. When we picked him up, he told the taxi driver that he was hungry and wanted something to eat.

“He took us to a restaurant at Ajao Estate and told the driver that he was going to pay for his services for the whole day.

“He called me aside and showed me a tablet before asking me to buy suya across the road for the driver and sprinkle the powder on it.

“I was confused but obeyed. The happy driver took the suya and ate. Few minutes later, he fell asleep. Moses then took the driver’s car key and we left. It was while we were leaving that he told me that was his line of business.

“He gave me N50,000 and asked me to go home. Two days later, he paid N170,000 into my account. That was more than my salary for three months while working in the bank. I got carried away and decided to work with him.

“I joined him to do several jobs in Lagos before standing on my own. That was how I got into the business.”

Ugwu, while revealing that carjacking had improved his financial status, disclosed that he was arrested while attending the burial of a family member.

He said, “You need to be generous to succeed. All I normally do is to board a lovely taxi and tell the driver to take me to any hotel of my choice. I usually tell the driver that I will sleep in the hotel and travel the next day to the village.

“I will tell him that I will pay for the days that I will need his service and will be ready to lodge him in the same hotel that I am staying.

“The taxi driver will be excited and he will agree. At that point, I will order for drinks and suya or food for him.

“The person that will bring the food is normally our agent, so his job is to lace the food and drink with the drug. Few minutes after taking the food, he will sleep off. I will collect the car key and drive off. It is very simple.

“In Lagos, we snatched three cars and sold them for N800,000 each. I have warned Kingsley several times to stop using the mobile phones of our victims but he did not listen. It was because of his carelessness that the police traced and arrested us.

“I was attending the burial ceremony of my sister when police arrested me.”

Other members of the gang, who all explained the different roles they played in carrying out these crimes, expressed regrets at involving in such, asking to be given a chance to repent.

The IRT, while revealing that efforts were ongoing to track and arrest other fleeing members of the syndicate, said that those arrested would be charged to court at the end of investigations