Abimbola Tewe: An Educator With Distinction. 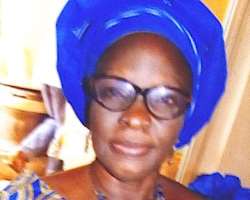 "If you have to put someone on a pedestal, put teachers. They are society's heroes."

She was young, beautiful, brilliant and ambitious. She was affable, amiable and sociable. She was a perfect study in politeness, courtesy and cordiality. Her elegance was, and still is devoid of arrogance while her air of foppishness is still repulsive to vainness or vanity, but essentially a functionality of dignity.

I did not know her in 1972, when she was the House Mistress in KERUBU, my darling KERUBU, our own KERUBU, the one and only CHERUBIM AND SERAPHIM HIGH SCHOOL, ILESA. But since I have come to know her, she has beautifully and effectively acquaint herself. She has without her knowing it, underscored her cultured background. Her good upbringing still shines through and through.

She exudes a calmness that screams in cheerfulness. She projects a kind of peace and satisfaction that is pronounced in its solemnity. Her velvet voice, sonorous in its sanguinity, soothingly serenades symphonically. She speaks with an aura of regality and majesty. She was coordinated, steady, effervescent and translucent.

She attended St. Margaret's School, Ilesa for her secondary education before proceeding to Christ School, Ado-Ekiti for her Higher School Certificate (HSC) or A-Levels and graduated in 1971. Her father, Philip Okeowo Orunmuyi was at that time the Principal of the reputable Ijebu-jesha Grammar School, Ijebu-jesha. He was a mentor of our own Chief Thomas Ogunfolabi, the founding Principal of own own KERUBU, the Cherubim and Seraphim High School, Ilesa.

"My father was very happy when he learnt I would be working with Mr. Ogunfolabi. He verbalized his confidence that I was in good hands. In fact and indeed, Mr. Ogunfolabi justified the confidence of my father in him. I was not only his staff, I was his daughter. He took care of me and mentored me like my father would have done," she had reminisced.

She went on, "I remember at a point, I needed my birth certificate. He stood for me like my father would have done. He stood in as my uncle and physically accompanied me to ensure that everything went well." She added that she felt awkward calling Ogunfolabi her boss, because he was just fatherly in all ramifications as he guided her through without any fuss or undue chastisation.

"As the House Mistress, I had a lot of fun. I enjoyed myself thoroughly. I was very young. I was barely older than many of the students at that point. I saw them as younger siblings of the same parent. I knew I had a responsibility. I had to model good character and discipline to them. I had to enforce the rules. Many of them were good kids from fantastic homes. They were well behaved, though I still had my favourites among them."

She expressed nostalgia about that time. She noted that every time she passed through Bolorunduro in Ilesa, she always had a good look at the Girls Hostel. The memories of her small room, cozy, cushy and comfy; of her descending and ascending the stairs to ensure that everything went well and in order and on time were always cascading into her consciousness over and over again.

She spoke of the morning devotions and the inspiring beautiful songs. She spoke of the Sunday Services at the Cherubim and Seraphim Church, Oke-Iro, a stone throw from Wesley Guild Hospital, Ilesa. It was compulsory for all the boarding house students. She spoke of the glistening and glittering white garments of the church members, how she admired them but disliked their lenghts. She sewed for herself, a white gown, that was tastely, traditional and fashionable.

Then, she remembered Bàbá Àdúrà Omóle. She remembered him as an energetic, tough, diciplined, determined and focused man whose belief in the School was more than ordinary. He was strict with the students and very encouraging to the staff. He really took good care of the teachers. "But I ran away from him when he tried to match-make me with an elderly person visiting from the United States."

She expressed gladness that she was given the responsibility as House Mistress after Miss. Remi Komolafe who was the first House Mistress of the School. She also remembered that she was succeeded by one Miss Bola Coker. Miss. Orunmuyi taught English and French Languages at KERUBU.

Mrs. Abimbola Tewe, then known as Miss Abimbola Orunmuyi was third of seven children. She attended Government Teacher Training College Demonstration School, Ilesa, for her Primary 1-5 and finished at St. Mathew's Primary School, Ijebu-jesha. After her stint at KERUBU, she went to Adeyemi College of Education, Ondo.

She taught briefly at Baptist High School Iwo, before proceeding to the University of Ibadan, where she obtained her B.Ed. in English and French Studies and later M.Ed. in Adult Education. She got married to Professor Olumide Tewe of the Faculty of Agriculture at the University of Ibadan. She taught in many schools before retiring as Principal of Orogun Secondary School, Ibadan in 2008.

Mrs. Tewe, who is now engaged in the business and art of hat making was very unimpressed at the direction of our educational system. She lamented about the lack of quality teachers who are making mistakes that well tutored kids of High School age could not make in her days. She pointed to meager salaries that they pay to teachers as a major disincentive and which has continued to undermine commitment of the teachers and endanger our entire educational system.

Mrs. Tewe who has been honoured by the old students association of Methodist High School, Bodija, Ibadan, where she was once a Principal, for her contributions to the quality of education and physical improvent of the school, noted that even private schools have been afflicted with the general malaise of the rotting system. She spoke of students having to sit on the floor on spread newspapers to learn without chairs and desks in many schools.

She expressed the hope that our governments would come around to appreciate the value of education, fund it better, pay the teachers better and focus on the development of the educational infrastructures. She insisted that a Nation that trivializes education of its children is on the path to perdition. She pointed out that a declaration of emergency in the educational sector is very imperative at this point in the country's journey.

With Mrs. Abimbola Tewe, it was a splash of swanky splendour of nostalgia. The encounter was illuminating, instructive and rewarding. I wish her continued peace, good health and contentment in her retirement.

"Teachers, I believe, are the most responsible and important members of the society because their professional efforts affect the fate of the Earth."