Open defecation: A threat to humanity, governments urged to end the menace 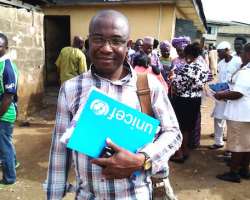 PUBLIC affairs analyst, Carl Umegboro has described open defecation in the country as alarmingly awful, stomach-turning and above all, a hazard to human race existing over the years and therefore called upon the federal, state and local governments to step up concerted actions towards ending the menace in no distant time.

Umegboro, also a social crusader stated this in an interview with newsmen in Abuja on Thursday after a media field-trip to Ibadan in the southwest on “Clean up Nigeria: Use the toilet” campaign which was organized by United Nations Children's Fund (UNICEF) in collaboration with Federal Ministry of Information & Culture, European Union (EU) and Department for International Development (DFID) through UKaid, and added that the act apart from appallingly being barbaric, is essentially, extremely dangerous to human life.

The crusader while commending President Muhammadu Buhari for his assurance to adopt zero tolerance in ending open defecation in the country by 2025 stated that the nuisance has contributed to high number of deaths of vulnerable children who every now and then are infected with diarrhea, cholera and other dangerous diseases.

He identified other costs of open defecation to include low productivity and economic loss resulting from avoidable illnesses, health impact especially on child development due to frequent episodes of Water, Sanitation and Hygiene (WASH) related illnesses as well as loss of dignity. Also important is high risks of insecurity and violence against women and children in the forests in the course of open defecation.

“Open defecation has for decades been overlooked by all levels of governments despite its negative consequences and implications to human existence. I commend Mr. President for his declaration to end the menace in few years time.

“Interestingly, such intervention which will lead to unprecedented provision of functional public toilets will robotically boost employment opportunities in the society when high volumes of public facilities are actively put in place across the nation.

“In fact, open defecation cuts across almost all classes of people due to lack of functional and safe public facilities in adequate numbers. Hence, it goes beyond looking for the perpetrators in the act but painstakingly counting the available public toilets in every neighborhood alongside their proximities which is in the negative.

“Federal government should ensure that state and local governments as well as private sector are attractively involved for optimum results. Then, enforcement must be total. I have confidence that through President Buhari's willpower and public support to the campaign, the nation will realistically become open defecation free (ODF) in 2025”, he said.

Umegboro also lamented that presently, Nigeria according to global statistics abysmally ranks first position in open defecation in Africa and second in the world after India which has technically moved away from the position waiting for Nigeria to step into her shoes before the end of the year. Meanwhile, this is the society that lawmakers have been allocating constituency projects over the years alongside sundry jumbo allowances to themselves.