Osinbajo and the fallacy of truth 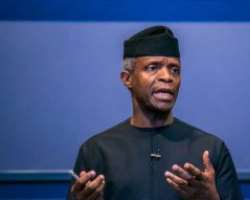 At a town hall meeting with Nigerians in New York on Sunday evening, Vice President Yemi Osinbajo was asked about the security situation in Nigeria. He responded that although there were actual incidents, the stories of violence and insecurity have been wildly exaggerated. He blamed the social media for its propensity to galvanise e-troops who infuse relatively mild situations with enough hysterics to magnify it into a significant social problem.

According to Osinbajo, some of the most 'dramatic' stories of kidnapping are untrue and merely fuelled by politics. He added that they try to verify every report of an abduction story, and eventually they find that at the end of the day, “people just tell all sorts of stories.”

I was taken in by the way the Vice President treats 'truth' as an objective measure of the reality he addresses. He said they try to verify every report of a kidnapping and that people “just tell all sorts of stories.” These two points are connected, and both reveal that Osinbajo is using the wrong analytical instruments to measure the truth value of the stories. While I understand that the job of his office includes working with factual details of kidnappings, and it is necessary to weigh evidence in this type of situation, he should also understand that premising the notion of truth on the verifiable content of stories people tell is fallacious. Not all stories are true because they are factual; they are true because they epitomise ongoing social sensibilities and sentiments. They are not true because they happened but because they symbolise the truth of a society's situation.

And what is the truth of Nigeria's situation? Insecurity in all ramifications. It is exacerbated by insufficient government response, and a sinking feel of despondency and helplessness that is further galvanised by Aso Rock's body language. From Zamfara, Borno, Osun, Ondo to Akwa Ibom states, there is an acute sense of insecurity plaguing Nigeria. Nobody is spared from the menace of herdsmen and other agents of deaths. People are not just telling all sorts of stories; all kinds of mishaps too are happening.