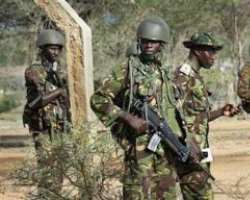 The Army has arrested three suspects in Sokoto State it described as notorious bandits.

The army spokesman, Col. Sagir Musa, in a statement on Monday named one of them as Malam Ibrahim.

He said the suspect was a notorious bandits' informant and collaborator renowned for collecting ransom on their behalf.

He said the second, Ashiru Goni, was the bandits' courier agent who specialised in transporting logistics for them within and outside Sokoto State.

Musa said the third, Mamman Taratse, was ”logistician for the criminals” and specialised in the sale of rustled cattle at various markets within and outside the state.

Similarly, he said troops raided bandits' location at Magira village and after fierce battle killed scores while several others escaped with gunshot injuries.

“Unfortunately, one soldier paid the supreme price during the encounter,” he said.