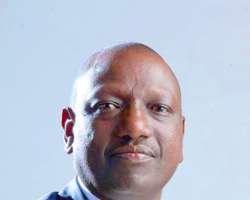 Dear William Ruto, the people of Kenya believe that you masterminded the violent and mysterious death of Jacob Juma because of the strive you had over mining contracts. More so are the people in Bungoma, Busia, Trans Nzoia, Vihiga, Kisumu, siaya, Homabay, Kisii, Kiambu, Kirinyaga, Muranga’a , Kitui and Kakamega Counties.When Jacob Juma was buried you promised that you will make sure to bring to the books those that had brutally murdered him, but so far you have not.

People are wondering whether this was a cajole or what was it? Still the people of Kenya tend to believe that you or the people politically related to you in Eldoret town know one or two things about the death of John Kitui (the Weekly Mirror Editor), Meshack Yebei (the owner of Smart Computers college-cum-the ICC witness for the victims of 2008 political violence in Kenya) and Ken Wafula, the human rights activists believed to be poisoned to death in Eldoret). Kindly clarify to the people of Kenya the above issues before you walk around asking to be voted as a president, as you too yapp about over forty people planning to assassinate you. The logic of assassination cannot not allow a crowd of forty people to sit and plan it. These were your vain and vapid sentimentalities purported to provoke sympathetic votes come 2022.But still you will not be voted to be a president of Kenya.

Come 2022 presidential elections, you will not be voted by the people of Kenya because of the following reasons; you are believed to know something about the death of Chris Musando, you are a product of Moi dictatorship when Moi’s rule was and still is the worst case of political brutality and dictatorship, you master minded 2007-2008 political violence in the rift valley, you are a land grabber, you and your tribe you have strong hatred for other tribes in Kenya, you and your people you have a soft spot for riches through corruption, you and your people don’t have respect of non-kalenjin tribes.

But above all else, I personally will not vote for you because when people were sacrificing their lives to fight the Kenya’s second liberation from Moi Gestapo like police state in Kenya, you and other senseless political opportunists like Mark Too, Nicholas Biwot and many others were shamelessly worshipping Moi’s political brutality on the people as at the same time you gave Moi the best ideas on to manage Nyayo Torture chambers, an under-ground bunker in which those concerned with democracy in the likes of Koigi Wa Mwere used to be brutally tortured during Moi’s reign. The logic of democracy requires that we vote for a person whose history has a tradition of support for freedom, we don’t vote for a person whose personal history is a tradition of selfish land grabbing, malingering, sycophancy to tribal tyranny and politics of exclusion.

How I wish you were literate in matters literature. I could recommend that you read Coralnious; it is a political satire by William Shakespeare. There is a main character in this book called John Falstaff. He suffered from a social disease known as falstaffity. It is a disease indicated by symptoms likes snobbery, megalomania, paranoia, and self-idolatry and inflated ego. He thought that the world cannot be unless he was in power. But still the world peacefully was without him power. I am often too see these symptoms of Falstaffity in your public behavior dear Dr. Ruto.