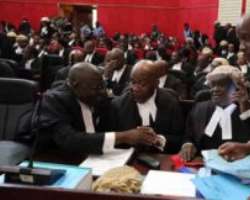 The Presidential Election Petitions Tribunal on Monday application of the the Peoples Democratic (PDP) and its candidate, Atiku Abubakar, to have access to the server of the Independent National Electoral Commission.

The five judges on the panel of the tribunal unanimously refused the request.

They explained that their positon was based on thefact that issues have been joined by parties on the existence or otherwise of the server.

PDP and its candidate in election Mr. Abubakar had applied to the court to compel INEC allow them inspect the INEC server allegedly used in collating the Feb. 23 general election.

Justice Mohammed Garba, Chairman of the panel ruled that granting such application at this interlocutory stage would preempt the substantive petition.

The judges say the tribunal cannot delve into those issues at the interlocutory stage.

“This will be unpallalatable,” Justice Garba held.

According to him, granting the application would imply that the court had “indeed recognised and found out that there is a central server into which results of the held on February 23, 2019 were electronically transmitted by the 1st respondent (INEC)”.

He said the Supreme Court had on many occasions warned judges to desist from “making observations, comments or pronouncements in its rulings with any likely effect of prejudging the main issue that can be regarded as the issue to be tried in the course of trial.

The petitioners are insisting that results from the presidential election were transmitted to the central server maintained by INEC.

Atiku and PDP had in their petition stated that by the figures obtained from INEC's server, they won the presidential election against Buhari and the third respondent, All Progressives Congress (APC).