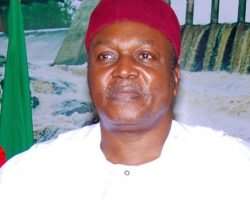 The Governor òf Bayelsa State and Chairman of the Peoples Democratic Party Governor's Forum, the Honourable Henry Seriake Dickson has condemned the Police raid on the residence of the Governor òf Taraba State, Darius Dickson Ishaku on June 11, 2019.

Police operatives led by a Deputy Superintendent òf Police who claimed to have been deployed with a warrant from the Presidency's Special Investigation Panel had broken into the Governor's Abuja residence to conduct a search on it.

The Governor òf Bayelsa State condemned the Police action in a statement by his Adviser, Media Relations, Fidelis Soriwei on Thursday.

Governor Dickson called on the Inspector General òf Police and other relevant bodies to investigate the illegal invasion of the governor's residence with a view to identifying the culprits for necessary action.

The Governor also urged the National security establishment to adopt appropriate measures to protect Governor Ishaku, members of his family and officials.

He said, “We hereby condemned condemn the invasion and forcible entry into the Abuja residence of the Taraba State Governor, Arc Darius Ishaku, by people who claim to be police operatives.

“We also call on the national security establishment to take the requisite step to protect Gov Ishaku, members of his family and officials.”