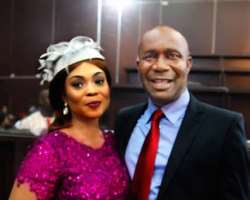 Thursday, 13th June, 2019 marked a new beginning in the annals of governance and representation in Imo State. It witnessed the inauguration of the 9th Imo State House of Assembly. The Assembly came to life, following a proclamation by the Governor of the State, Rt. Hon. Emeka Ihedioha, represented by the Deputy Governor, Rt. Hon. Gerald Irona.

The twenty seven members of the State House of Assembly took their oath of offices, heralding the commencement of the 9thAssembly. But that is not the story. The gist is that the lawmaker representing Oguta State constituency, Hon. Frank Ugbomah got an overdose of honour and celebration after his inauguration, as the entire Oguta Local Government Area was literarily locked down, following celebration of his inauguration.

The celebration got to a head when people from all walks of life gathered at St. Mary’s primary School, Orsu Obodo, Oguta Local Government Area of Imo State, in honour of their own and member representing Oguta State Constituency in the State Assembly.

It was a roll call of who-is-who in the area. From the Deputy Governor of the State, Rt. Hon. Gerald Irona and his adorable wife, Ogbuefi Vivian Irona, to other political leaders, Religious and Traditional Rulers, members of the academia, among others. In his remarks, Deputy Governor of Imo State, Rt. Hon. Gerald Irona congratulated the lawmaker for emerging victorious at the polls, urging him to do his best towards fulfilling his electoral promises to people of the area.

He reiterated the resolve of the administration of Rt. Hon. Emeka Ihedioha not to interfere with the activities of the Legislature, promising that the principle of separation of powers shall guide the present administration in all that it does.

Addressing newsmen shortly after the inauguration, a political leader in the area and former Senior Special Assistant to the Governor of Imo State, Hon. Williams Ejiako described Ugboma’s emergence as divine, urging him not to disappoint his people.

He expressed gratitude to the people of the area for the confidence reposed in him to represent them, promising not to disappoint them.

According to him, “my stay in Imo State House of Assembly shall witness effective representation of my people. Lawmaking is serious business and I will ensure the strengthening of the legal framework for massive development of our area. I will ensure that quality laws are introduced to promote good governance in Imo State. I can assure you that gaps identified in existing laws will be closed and new laws made for the good of Imo State. I am impressed by the quality of lawmakers I have interacted with so far and I can assure you that there are a lot of sound minds in the 9th Assembly. We shall make Imo people proud.”

Commenting on the person of the lawmaker, a legal practitioner from the area, Chief Kingsley Njoku described Hon. Ugbomah as an honest and brilliant gentleman, whose footsteps are worthy of emulation.

“I have known Ugboma for nearly twenty years now. I have had several dealings with him. He is brilliant, objective, honest and thorough. When I learnt that he emerged the lawmaker representing Oguta State constituency, I had a sigh of relief, knowing that we are back to the days of quality representation of Oguta State Constituency in the State Assembly. You can see for yourself what is going on here. You can see the mammoth crowd and quality of persons that attended his inauguration reception. You can hear what people are saying. All these show that we made the right choice in Frank Ugbomah.”

“History shows that our House of Assembly members hardly go more than once. But watch it. Ugbomah may break the record in Oguta Local Government area. If it is about quality representation, forget it, Oguta people should go to bed with their both eyes closed.”

“With Rt. Hon. Gerald Irona as Deputy Governor and Hon. Frank Ugbomah as our House of Assembly member, the age-long prayers of Oguta Local Government have been answered. Indeed, good governance has come.”

The highlights of the reception were special cultural and masquerade dances, speeches, presentation of gifts, among others.

With this development, Hon. Frank Ugbomah is indebted to people of the area. The debt is good governance, through effective representation in the State Assembly.

To whom much is given, much is also expected. Considering the encomiums showered on him by stakeholders in the area, it is obvious that his people trust and believe in his ability to deliver. He must not fail.

The only language people of the area want to hear is good governance and effective representation. Anything short of that is unacceptable.

In addition to making outstanding laws that will enhance the living standards of the people, the lawmaker must ensure periodic meetings with critical stakeholders in the area, particularly, core professionals, with a view to informing them of his activities, while also getting their opinion on issues that affect them.

Effective representation requires regular consultation with the people. The entry point is to conduct a stakeholders’ mapping and evolve strategies for engaging each of the stakeholders.

This should go beyond party leanings. The time to act is now!

Dr. Walter Duru is a Communication and Public Relations expert. He can be reached on: [email protected]