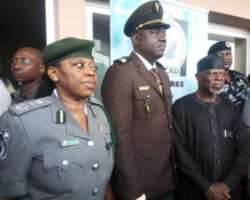 Ali made the disclosure during the inaguration of the connectivity platform established by the European Union at Seme Border to improve trade.

The event held on Thursday.
According to him, customs is not opening land border for importation of used vehicles but is interested in the success of the connectivity platform to facilitate border trade between Nigeria and Benin Republic.

The customs boss urged all stakeholders to embrace the platform to enable the two countries to achieve seamless operations and trade facilitation.

He said that the platform would assist genuine traders, adding that smugglers would be fought.

“We are envisaging compliance, and we hope we get compliance; where individual decides not to comply, then the customs will ensure there is no illicit trafficking between the two countries.

“At the initial stage, I do expect some challenges before our traders get used to the system; there is always an apprehension when it comes to ICT (Information and Communication Technology, people are not very comfortable.

“We have some series of sensitisation, we will continue to tell them the benefits of these technologies and what they stand to gain.

“It is our hope that in no time, all of them will key in into the platform,” Ali said.

He said that through this platform, false declaration of goods and some other illegal activities, experienced due to manual operation, would stop.

Ali further said that the platform would open in Windows format, adding

that it would increase the volume of trade and revenue between the two countries.

In his remarks, the Director-General of Customs, Republic of Benin, Mr Charles Sacca, hailed the efforts of NCS to ensure the two countries achieved success in the connectivity platform.

“Since 15 years ago, both countries have been working toward this achievement, we thanks God for making it successful .

“We have been able to put in place monitoring teams.

“The connectivity will be a milestone for both countries with the help of the World Customs Organisation.

“Also, our administration will be able to integrate other agencies into the platform.

“Before now, it was difficult for other countries to locate Benin because it is a small country but with the collaboration, Nigeria being the Giant of Africa, we are going to be popular as a result of border trade,” Sacca said.

The News Agency of Nigerian (NAN) reports the use of connectivity platform was demonstrated before the public, indicating the way transaction processing will be done.

A transaction was demonstrated between Benin customs and Nigeria customs where NCS in Abuja checked the documents of a consignment coming from Benin without visiting the border post. (NAN