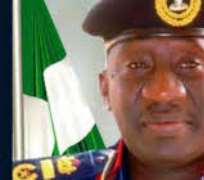 The Vision-One Leadership Development Initiative for Nation Building has honoured the Nigeria Security and Civil Defence Corps under the able leadership of its Commandant General Abdullahi Gana Muhammadu.

Presenting the award on Thursday, June 20, 2019 at Youths and Stakeholders Summit on curbing the Vandalization of Power, Oil and Gas Infrastructure in Nigeria; Comrade Emmanuel Johnny, who is the Executive Director of VOLDl, commending the Commandant General for improving the integrity of the Corps. "Gana has motivated others to insist on serving with integrity, hence the recognition of the Corps for an award Excellence" over war against vandalism, Emmanuel said.

While commending the Corps on the level of professionalism in discharging its constitutional role and describes the institution as most Outstanding Security Agency in curbing vandalism in Nigeria, has called on Nigerians to guide against the killings of the officers whose duty is to defend the nation properties and the Nation atlarge.

Added that, we must be proud of Civil Defence and we must take back our country from the hands of vandals by given the Corps the needed support to protect the citizens' lives and properties.

The organisation further pledged its commitment to sensitize and educate the youths to have a paradigm shift from vandalism cultism, terrorism and other forms of crime to embrace peace in the country.

While assuring the Corps that, working with the youths will bring significant progress, the organisation thanked the Corps as the citizenry oriented organization, no doubt Nigerians preferred dealing with Civil Defence rather than any other security agencies in country and appreciated the Corps for always being neutral in its dealings and focus on professionalism.

In his response, Gana described the award as a challenge for greater productivity, noted that the reward for hard work is more work.

“I am overwhelmed by this award of excellence as most Outstanding Security Agency in curbing vandalism in Nigeria and therefore see the award as a greater challenge for more work.

“It means that one needs to remain focused at all times and dedicated to one’s endeavour, as you might not know those watching you either for good or bad,” he said.

The Commandant General, lauded the gesture of Vision-One Leadership Development Initiative (VOLDl) for recognizing the efforts of Corps.