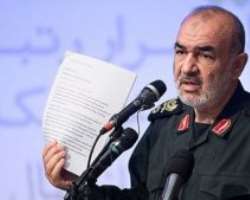 The U.S. Navy MQ-4C Triton was shot down by an Iranian surface to air missile while the reconnaissance drone was flying in international airspace over the Strait of Hormuz on Thursday, a U.S. official told ABC News.

Earlier, Iranian state media had quoted Iran’s Islamic Revolutionary Guard Corps as saying it had downed a Global Hawk drone when it entered Iranian airspace near the Kouhmobarak district north of the Strait of Hormuz.

The MQ-4C Triton is an unarmed surveillance aircraft powered by a jet engine, which is capable of operating at altitudes as high as 60,000 feet. It is the Navy’s version of the reconnaissance aircraft that the Air Force calls the RQ-4 Global Hawk.

The incident is not the first time in recent days that Iran has targeted an American drone off its coast.

Last Thursday, Iran attempted to shoot down an MQ-9 Reaper that was surveilling the attack on one of two tankers in the Gulf of Oman. The United States has blamed Iran for being responsible for the attacks on the two tankers — a claim Iran has denied.

“According to our assessment, a modified Iranian SA-7 surface-to-air missile attempted to shoot down a U.S. MQ-9, at 6:45 a.m. local time, June 13, over the Gulf of Oman, to disrupt surveillance of the IRGC attack on the M/T Kokuka Courageous,” CENTCOM spokesperson Lt. Col. Earl Brown said in a statement to ABC News on Saturday.

“Subsequent analysis indicates that this was a likely attempt to shoot down or otherwise disrupt the MQ-9 surveillance of the IRGC attack on the M/T Kokuka Courageous,” Brown said.

In early May, the Pentagon rushed the aircraft carrier USS Abraham Lincoln and a B-52 bomber task force to the Middle East to deter possible attacks by Iran or Iranian-backed groups on U.S. forces and U.S. interests in the region.

PHOTO: In this undated photo released by Sepahnews, the website of the Iranian Revolutionary Guard, Gen. Hossein Salami speaks in a meeting in Tehran, Iran. (Sepahnews via AP)