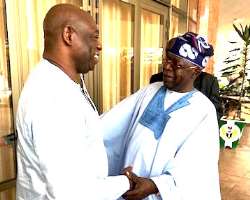 Lately, I have been coming across lots of interviews and analysis from different stakeholders about the epic battle against the annulment of Saturday June 12, 1993 Presidential poll, and the subsequent declaration of June 12 as Democracy Day through the courage of President Muhammadu Buhari who even honoured the heroes, both living and the dead that actively participated in the popular and legitimate political struggle.

Of particular interest to me was the interview of Mr. Kola Abiola, son of late Chief Moshood Kashimawo Olawale Abiola, (MKO) winner of the annulled June 12 election, who gave his own perspectives about the activities that greeted the struggle whilst his late dad was incaserated by late General Sanni Abacha government for demanding for the revalidation of his stolen mandate which was willingly and constitutionally given to him by majority of Nigerians across the six geo-political zones of the country irrespective of their religious background or class.

However, one thing I found dangerous and unacceptable was when stories of such political agitations are told with sensational coloration, elevation of falsehoods and fabrication over and above truth. As a stakeholder who was a victim of that despotic regime who was also at the forefront of the struggle, it then became necessary for me to speak out and change the narrative to its true state and obliterate facts of historical events about ‘June 12’ struggle that were distorted, with a focus on the roles and contributions of freedom fighters, politicians, policy makers, labour leaders (especially Oil and Gas workers), rights activists, the press, student unions, etc, who put their lives and careers on the line and painstakingly laboured for the enthronement of democracy in Nigeria.

For clarity, in the month of July 1994 the National Executive Council (NEC) of Nigeria Union of Petroleum and Natural Gas Workers (NUPENG) took the patriotic decision to fight for the actualization of the June 12, 1993 Presidential election results through the process of political strike to put pressure on the Abacha regime over the annulled election so as to bring back Chief MKO Abiola as the President of Nigeria as desired by Nigerians across board.

Similarly, and in collaboration with Petroleum and Natural Gas Senior Staff Association of Nigeria (PENGASSAN) the same decision was taken by their NEC. The stay at home strike action by members of NUPENG and PENGASSAN started with full commitment of the oil workers. It was a classical strike action devoid of economic interest but political.

The reasons for the commitment of the oil and gas workers to actualize the result of June 12, 1993 Presidential elections were as follows:

Throughout the period of the 9 weeks strike action led by Comrade (Chief) Frank Ovie Kokori as General Secretary of NUPENG and myself as the Deputy General Secretary of same Union at that time, Senator Bola Ahmed Tinubu was always in contact with NUPENG and PENGASSAN to sustain the pressure against the government in order to ensure the enthronement of democracy and most importantly, the swearing in of Chief MKO Abiola as the President of Federal Republic of Nigeria.

At a point when Chief MKO Abiola came back from London, it was Senator Bola Ahmed Tinubu who organized a meeting with us and Abiola for the first time, precisely two weeks after our strike had started. At that meeting which held at one of Chief MKO Abiola’s hideouts at Ologun Agbaje Street in Victoria Island, Lagos, Chief Abiola commended and thanked us for our patriotism and for the strike action which took place even without prompting from him.

In the light of this, it then became absolutely illogical and unthinkable for an elected Federal Parliamentarian, Senator Bola Ahmed Tinubu, who throughout the 9 weeks strike action was known for consistently encouraging us with people like late Dr. Beko Ransom-Kuti, late Dr. Fredrick Fasheun, Mr. Femi Falana (SAN) and other civil rights activists; to now simultaneously lobby for the post of either Administrator, Deputy Administrator or Commissioner under the same unpopular military junta that Tinubu was grossly opposed to, openly mobilized against, at the risk of his personal life, would be most unfair for anyone including the first son of late MKO, Kola Abiola to come up with insinuations or innuendos that are damaging, misleading and erroneous against such man of good conscience who never compromised, despite the backlashes.

Secondly, Pascal said a prominent Chief MKO Abiola’s son emphatically said during an interview he had with the media that the reason why his father dropped Pascal as Vice President was that Pascal would have been a political liability to his father. For these reasons Pascal was out of resentment demobilizing the labour movement at that time from going on strike. It was only his deputy at that time, Comrade Adams Oshiomhole with some other resolute industrial Union leaders that supported NUPENG and PENGASSAN’s patriotic decisions and actions.

Without prejudice, among those to be considered as heroes of democracy, most deservedly should include Comrade (Chief) Frank Ovie Kokori, former General Secretary of NUPENG whom I was his deputy, Kojo Agamene of blessed memory the then President of NUPENG, Chief W. Babibi, then General Secretary of PENGASSAN, S.F. Oginni, H. Falaye, etc.

Although different people played different negative roles both in public and in secret for the actualization of June 12 stolen mandate, some said in the national interest, some on the flip side said it will move Nigeria forward, so whatever they claimed were their reasons to work for the annulment or against the actualization of June 12 are also known to them, as they do not make it public till today.

All I know is that some people stood firm to the end for principle, patriotism and the fact that if the election had been allowed to stand, with the benefits of hindsight, Nigeria would have been better than what it is today. With the actualization of the results of the election, we would have been able to destroy the scourge of religious and ethnic divisions amongst Nigeria.

June 12, 1993 poll in my view was a watershed in Nigeria’s history, though political intrigues had somewhat tried to wish away that date, but the date has eventually survived political suppression over the years through the popular and acceptable political willpower of the current democratic regime. It is truly a landmark and momentous accomplishment on the part of President Buhari.

It is my utmost desire for a peaceful, united and prosperous Nigeria as well as political leadership with strong will that could also dispassionately promote democratic virtues and engender even distribution of Nigeria’s commonwealth without bias or sentiments.

It is equally my wish to see a flourishing, safe, and investment friendly socio-economic clime accompanied by sound education, robust human capital development, abundant employment opportunities and capacity building initiatives for the youths, good health care system, increase infrastructure development and other basic needs of Nigerians in the next 4 years so that the people can be more united and be a force to be reckoned with in Africa and the world.