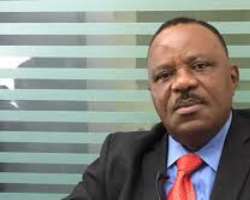 In a pre-election piece, “APC Risks A Crushing Defeat With Oshiomhole As Chairman”, I managed to put into words that the party’s “problem begins with the man’s personality. Oshiomhole, as a party chairman, comes across as a shambolic-cum-egocentric character understandably desperate for attention after leaving office as Edo State governor. In short, the APC has found itself in a situation akin to the proverbial quagmire, where a crown was mistakenly placed on a clown, and the natives were expecting him to perform like a king. For sure, the comrade thrived as a union activist, might have been a good governor, and he can even become a president, after all Donald Trump is one. But the post of a national party chairman is uniquely different. It calls for a unifying figure — composed, likeable, temperate, genial, compassionate and prudent. Mr. Adams Oshiomhole is none of these.”

Unless one has not paid close attention, after Oshiomhole superintended over the most crisis-ridden party primary exercise in the Nigerian history, the All Progressives Congress (APC) would go on to suffer consequential losses in the last general election. Although President Muhammadu Buhari was re-elected, not to be lost in the debate is the reality that he garnered less votes in 2019 than in the 2015 election, when he was a mere opposition candidate. The crisis also saw the opposition crack the ruling party’s southern wall of the South-West Nigeria, taking away two crucial states of Oyo and Ondo. In fact, our saving grace in 2019 was that the main opposition party nominated a deeply flawed presidential candidate.

The performance of APC in the state elections were even worse. Amidst charges of bribery and nookie favours, Oshiomhole imposed unpopular candidates in many states and constituencies against the wishes of the party faithful. As a result, the APC, which assumed power in 2015 with a commanding control of 23 states, has now seen its fortune dwindled down to clinging onto 19 states. The extent of the gloom becomes clearer when combined with the growing fears that the crisis in the party is likely to cost additional states in the upcoming off-year governorship races in Kogi, Ondo, and particularly Oshiomhole’s home state of Edo, which he shamelessly failed to win for President Buhari. Needless to remind that Kano State, once the party’s electoral mainstay, has turned into a battleground.

The current crisis conundrum, however, is that Oshiomhole’s leadership style is like a belligerent cancer and has spread beyond the party. It is already attacking the veins of Buhari’s second term. Keenly aware that he has grown virally unpopular within the party, the Iyamho-born party chairman has become desperate and ready to do the bidding of anyone who can save his job, no matter the consequence. The comrade has found the cover in a couple of influential party henchmen, who are now using the national chairman as a pestilent puppet to perfect their selfish ambitions at the cruel expense of President Buhari, the party, and the Nigerian people.

Consider this: The common knock on Buhari’s first term centered on a pattern of injustice, as typified by lopsided political appointments. Upon being re-elected, the president promised to make amends, proclaiming that “In the area of allocation of political offices, our focus will be on merit and national spread such that every part of Nigeria will have a sense of belonging.” And a deserving nation greeted the news with resounding ‘amen’ and ‘amin’.

But this joy was short-lived, because Oshiomhole quickly circumvented the president with his daily dose of inflammatory rhetorics and antics that signaled a backdoor to another four-year term of political vendetta. The garrulous party chairman not only boasted that he would dictate the principal officers of the legislature, he also gloated that the APC would adopt a winner-takes-all approach among Nigeria’s six geopolitical zones, as well as over the opposition. In his words, “We do not need to do business with the devil for us to survive in the Ninth Assembly.”

To forestall an unholy alliance designed to hijack the leadership of the National Assembly in the crucible of Oshiomhole’s unwary threat, the Speaker of the House, Femi Gbajabiamila, then a candidate for the office, had to go out of his way to commit 60 plum committee positions to the opposition. The implication of this arrangement is that a good portion of Buhari’s change agenda will once again be dictated by a discredited opposition party, thanks to Oshiomhole’s signature bluster. This open optics of a clashing agenda within the party explains why Nigerians no longer take the words of the loquacious ruling party chairman without a grain of salt.

Even more troubling, Oshiomhole’s handpicked leadership of the legislature has inflicted irreparable damage on Buhari’s second term and beyond. Only a lunatic enemy of the president, APC, and Nigeria would wish a scenario where the upper echelon of both the party and its government continually excludes the entire Igbo nation of the South-East and South-South zones or the entire nine states that make up the old Eastern Region, a vital arm of the tripod by which the country is supposed to stand. Fast forward to 2023, unless drastic changes are made, while the PDP will confidently compete in all the 36 states and the Federal Capital Territory, the APC will have no business whatsoever taking its campaign across the east of Niger, thereby starting off with nine states already in the opposition column.

The trending argument that power must be shared in line with voting patterns is not only naked nescience, it is also unpatriotic and, of course, a crude onslaught on democratic opposition. A prudent party chairman ought to have recalled that the South-West zone — which had been the proud and generous bastion of national opposition till 2015 — did not vote for President Obasanjo in 1999; yet, neither the members of the then-ruling party from the zone nor the zone itself were punished for free choice. Similarly, the North-West zone, which had always provided block votes for Buhari since 2003, was never denied its rightful place. There is wisdom in the common saying that what unites the nation ought to be placed above what divides it.

The objective fact is that Adams Oshiomhole neither has any sense of history nor the vision to lead a progressive party. Instead of fortifying the cardinal principles of the APC, which promote inclusiveness, diversity of opinion, and mass empowerment, the only vision Nigerians have seen from the former union activist is a clannish agenda commonly spewed out with a cascade of vulgar vanity, temper tantrums, and sheer shenanigans.

The solution is to surgically remove Oshiomhole from every sphere of public leadership before he destroys Nigeria. And, to think of it, if his winner-takes-all-approach is to be embraced, Adams Aliyu Oshiomhole might as well not deserve any serious position in the APC leadership or its government. After all, the comrade could not carry his South-South zone or even his home state of Edo, an APC state, despite claiming to have squandered huge elections money in the area in the course of Buhari’s re-election. Additionally, a party that prides on its anti-corruption strides must not have as its chairman, a man who has a strong corruption noose dangling around his neck.

SKC Ogbonnia, a 2019 APC presidential aspirant, is the author of Effective Leadership Formula.