Warn Criminal Elements In South-west, “Time Out”
By The Nigerian Voice 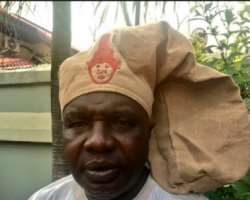 The President General Of O’dua Peoples Congress, OPC, Aare Prince Osibote has been meeting and consulting with Security Chiefs and other Security stakeholders in Abuja. The mission is not unconnected with the current security situation in the South-West of Nigeria.

The Nigerian Voice gathered that the President General held a closed-door meeting yesterday, 18th June 2019 with the Inspector General Of Police, Muhammed A. Adamu, NPM,mni, DIG Operations, Abdulmaji Ali and others.

According to our source, the details of the meeting was not made public, however the OPC leader was quoted as saying that the meeting with the Police hierarchy was of mutual understanding on the way forward for crime detection and prevention in the South-West of Nigeria. Probed further on the position of his organization and that of the Police, he simply said that their discussion is not for the public. Previously, on the 17th of June, he held meetings and consultations with other security chiefs in the Nation’s capital.

Before he embarked on the Abuja trip, he had issued a statement on the security situation in Southwest, saying, “Enough is enough. Yoruba are peace loving and hospitable people. We welcome everybody with open arms, but the OPC will not allow any individual or group to make the Southwest unsafe or turn the region into a den of criminals.

“Time is up for the criminals abducting people. This is the final warning to them; they should stop now, or relocate elsewhere outside the Southwest. If they fail to do so, they will soon meet their Waterloo.

“We are watching the unfolding ugly developments with keen interests.

“Yoruba and other residents in the South-West should not panic. We are, however, calling on the Federal Government to quickly address this insecurity problem before it further degenerates.

His meetings and consultations continue today in Abuja. Implementation of action plan on the strategic meetings on the deteriorating security situation in Southwest is expected soon.