Umahism: The Cathechism Of Good Governance. 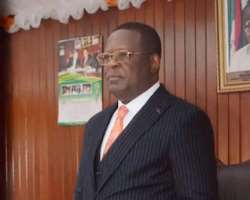 For decades, Nigerian, nay African, politics has been condemned for lacking philosophical framework. This, in fact, could rightly be said to be the precursor of bad leadership which is the bane of the African continent. Achebe raised what passed for leadership alarm in his book, "The Trouble With Nigeria". According to the literary icon "The trouble with Nigeria is simply and squarely a failure of leadership". Decades later, President Paul Kagame of Rwanda succinctly augmented Achebe's submission. Kagame blamed Africa's woes on the failure of mindset; and argued that Africa needed to "mobilize the right mindsets, rather than more funding".

In war-torn rustic Ebonyi State which qualified as the Nazareth of Nigeria, a bright sun rose in the dark leadership tunnel of Africa on 29th May, 2015 when the Divine Mandate administration of Engr. David Umahi was inaugurated.. Through systematic and creative harnessing of local variables, Umahi has successfully reversed the negative profile of young Ebonyi State; set the State on a trajectory of supersonic development; and created in his trail a body of autochthonous and effective leadership or democratic creed culminating in a vista of antidotes to the leadership jinx of Africa. This inspiring home-made leadership creed which is imbued with sufficient political will and unwavering focus on the people is termed "Umahism" - a derivative of the name of Engr. David Umahi who remains its progenitor.

The first tenet of Umahism is that government is an instrument of peace and as such, peace should be the first fruit of democracy. Walking this creed, Umahi stood firm on grounds of neutrality and reconciled, on permanent terms, the warring Ezillo and Ezza-Ezillo people as well as parties to other sundry conflicts in Ebonyi State; and made the state one big peaceful family. A peace template was developed and through it, subsequent conflicts in the state are usually nipped in the bud before they fester. The APC Presidency in Nigeria in appreciation of this tenet of Umahism had enlisted Engr. David Umahi's services in the resolution of the intractable conflicts between herders and farmers in Nigeria.

The second tenet of Umahism is that problems are catalysts for developement. Unlike his colleagues, Umahi who was armed with the right mindset and political will for leadership took a frontal dive at the inclement economic recession which coincided with the onset of his administration. This lodged him and his administration in the aperture between the two destructive horns of the bull of economic recession. Being there, Umahi invested all his faculties in his determination to conquer recession and succeed. The result was that while other governors were crippled by the impact of the recession, Umahi soared above it; and using local manpower and resources, launched an impressive infrastructural programme which put 60% of Ebonyi roads with a cumulative distance of about 800 kilometers on rigid pavement; gave Abakaliki three twin 800-meter overhead bridges and an overhead glass tunnel with an aerial roundabout; and a modern overhead bridge at Abaomege among others. That this wind of prosperity in Umahi's Ebonyi State which began at a time the entire globe was witnessing an endemic recession was wholesome and comprehensive is evinced by the fact that every sector of the state is brimming with meaningful projects and programmes which Ebonyi people are celebrating and will continue to celebrate for a long time. Because the focus of this piece is to project the viability of Umahism as Africa's emerging modern leadership creed, we shall not go into the impossible task of exhaustive enumeration of Umahi's projects/programmes in Ebonyi State. However, one may recall that when I viewed the concept of Umahism from the perspective of this particular tenet, I submitted that, "Umahism is positive vision driven by godly courage, it is the capacity to proactively dig beyond the veil of problems/pains and access the treasures that lie beneath them: Umahism is simply a stubborn but reasonable will to succeed against all odds". (New Telegraph Newspaper Vol 4 No. 1105; 1st March, 2017)

Another tenet of Umahism is that the purpose of governance is to serve the interest of the people. This implies that leadership should wear the masses' shoes when drawing up public policies. This will enable the leaders measure the probable transitional impact of the policies on the people and, where necessary, make remedial provisions to help the people absorb the transitional shocks of the new policy. For instance, during the construction of Akanu Ibiam overhead bridge, Engr. Umahi paid compensations as required by the Land Use Act to landlords whose buildings were marked for demolition. Putting himself in the shoes of small-scale entrepreneurs who plied their trades in the buildings marked for demolition, Umahi crossed to the other side of the road and erected a shopping complex which he gave out free to the entrepreneurs and helped them relocate before demolishing the marked buildings. In another instance, when Umahi ejected the illegal occupants of the permanent site of Ebonyi State University who had serially spurned the relocation orders of previous administrations, he gave each of the families funds to enable them relocate. Engr. Umahi is pursuing a credible resettlement plan for Izzi Unuphu people who were abandoned to fate by Umahi's predecessor after taking their land for the centenary city project. To cushion the impact of the economic recession on the people, Umahi introduced an economic empowerment programme which has unprecedented positive implications for youths, widows, women, men and the aged both within Ebonyi State and in Diaspora. For the first time, political considerations were removed from the qualifications for benefitting from empowerment programmes in Ebonyi State. Umahi equally runs personal on-the-spot empowerment programmes, hospital amnesty programme through which medical bills of indigent patients are paid by him; and creates time from his busy schedule to visit and pray for the sick in the hospitals.

Fourth on the list of the tenets of Umahism is that leaders should involve God and all men of goodwill in the development of the state. This demands that after elections, leaders should inject the higher order ordinances of God into their administration by ventilating state affairs to enable patriotic citizens contribute to the development of the state. While the involvement of God in Umahi's administration is not in doubt, it is on record that Governor Umahi ran the most inclusive administration in the history of Ebonyi State. He appointed many people who neither belonged to his political party nor supported him during the elections once such individuals have positive contributions to make to state project. The over-riding advantage of this is that it earns the leader the support of God, consolidates the leader's original support base and expands it by winning over his adversaries for the simple reason that people find it easier to support programmes they understand and are involved in.

Another tenet of Umahism is that leadership should be ingenious enough to use available human and material resources to solve the needs of the society. Umahi has solved the security, infrastructural and sanitation needs of Ebonyi State using local manpower and resources. He has motivated Ebonyi mid-level engineers to successfully fabricate biomass gasification plants in a renewable energy programme which targets a cumulative generation of 7.5 MW of power through biomass. This will power the three Industrial clusters and the rest of Ebonyi State; while the extra energy will be sold to power distribution companies. Through the largest waste recycling plant in Nigeria which Umahi built in Umuoghara, Ezza North LGA, Ebonyi families will soon begin to earn extra income through sales of domestic refuse. Degradable refuse will be used to produce fertilizers to support the Agricultural Revolution programme to ensure food security, while non-degradable refuse will be recycled into raw materials for the industrial clusters in Ebonyi State and elsewhere. Governor Umahi has motivated Ebonyi local engineers at the Ministry of Power to venture into solar power generation. The demonstration project in Uburu has succeeded and is reliably powering street lights covering a distance of 7.84 kilometers. That job which a Chinese company refused to do for N17 million naira was done by Ebonyi local engineers at a cost below N3 million naira with 95% local imput. Speaking on this project, the permanent secretary-designate of Ministry of Power, Engr. Godwin Nwankwo revealed that the trouble of running the street lights with 125 litres of diesel on daily basis has been solved. The energy generated by this local effort is 100 KW which was 70 KW in excess of what the existing street lights in Uburu needs. The ministry will use the extra 70 KW to expand the street light network. According to Engr. Nwankwo, "Governor Umahi wants this feat to be replicated in other locations with our health centres, educational institutions and council secretariats as priorities." That Ebonyi State is on her way to becoming a power-generating state is heartwarming; and the credit goes to the visionary and inspiring leadership of Governor Umahi.

Finally, Umahism enjoins leadership to be transparent, fair and to show practical examples. This principle is very important for the African continent where corruption is rife. Governor Umahi holds many records in these regards. He was the first governor to publish all his projects, their respective costs, details and locations in the history of Ebonyi State. Umahi was the first governor of Ebonyi State to ignore voting pattern as consideration for siting and location of projects. The governor equally took development projects to "gentile areas" of Ebonyi State like Effium, Umuezeokohu and other communities which were excluded from development programmes of the state for over two decades. The transparency, fairness and sense of probity of Governor Umahi earned him appointment as "Anti-corruption Commander" by ICPC - an anti-graft agency which has been the nightmare of corrupt public officers in Nigeria. Umahi's sense of supervision is painstaking; while his schedule of supervision is compared to the second coming of Christ: He could be at any project site anytime, like a thief! Going by the revenue profile of Ebonyi State, it is clear that it is only a frugal and sincere leader like Engr. Umahi that can achieve the things Umahi has achieved for Ebonyi people.

In conclusion, Umahism is, certainly, a better form of democracy which has the courageous and creative delivery of evidences of good governance to the people as its paramount objective. It is my pleasure to hereby present Umahism - an autochthonous, unique and wholesome catechism of good governance or effective leadership to Nigeria, Africa and the global community. In making this presentation, I am convinced that it will promote good governance to the glory of God and for the benefit of mankind as witnessed in Ebonyi State. I invite political scientists and curriculum designers to conduct more research on this unfolding political philosophy or concept of effective leadership in other to stoke its rays to full dazzle and thereby equip emerging leaders with its workings. Surely, something good has come out of Ebonyi State which is the Nazareth of Nigeria!