Kidnapping: Nigerians in the grip of ‘criminal elements’ 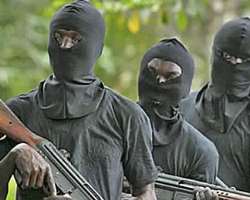 It is indeed worrisome and heart-rending that the rising wave and recent increase in criminal activities, especially the frequency of ‘kidnapping’ across the country has assumed another frightening dimension. Sadly, the recent developments bordering on the worsening insecurity of lives and property have in the estimation of many Nigerians, put a big question mark on whether Nigeria is truly on the path of a “secured” Next level in a positive way.

Every day, newspapers, television screens and radio airwaves are awash with news of people going ‘missing’, ‘kidnapped’, and so on and so forth. At the end of the day, all of us merely leave our mouths ajar, mumble some curses and show sign of sympathy and resign ourselves to our fates. Different states and major highways across the country have experienced all sort of disturbing resurgence in crime wave as robbers and kidnappers have returned with vengeful fury and have seemingly been taking turns to unleash terror on the populace and travelers especially.

Over the years, kidnapping in Nigeria has become a monster that appears to have defied solutions. While it has permeated virtually every strata of the society, it has continued to grow in sophistication and style. It has become a pet-crime indulged in by some misguided unemployed youths, especially in the South-South and South-East. Today, it has spread to all parts of the country, with the North now a major flashpoint.

It is crystal clear that media has exhausted their tenacity in reporting the cases of kidnapping in Nigeria but sadly the speed at with which the evil is growing further in Nigeria and the merciless ways that lives of innocent ones are being wasted is getting more worrisome. This situation is now becoming excruciating to Nigerians such that everyone is getting more conscious of their environments and bus they board to their various destinations.

Meanwhile, some unsuspecting passengers who board commercial buses to their respective business places ended up falling into the hands of these criminal elements. Even at times victims are robbed and thrown out of the fast-moving vehicles. Since the mid-seventies, Nigeria as a country has been experiencing what is referred to in criminological text as a “crime problem” – it has passed the normal tolerable level to the abnormal and now it has become a societal problem. One of the major causes of kidnapping in Nigeria is the preponderance of ritual and spiritual proclivity.

Although, no society is strictly immune against insecurity but the nature and its rate of occurrence as well as the negative implications it portends on societal development varies from one society to another. This trend on highways especially is becoming popular and if concrete steps are not taken, they will have severe socio-economic prevention of crimes and violence in Nigeria. Hence, peace and lasting security should always be the persistent objective of any government and her citizens.

Unfortunately, the Nigerian Police, which is the major constituted security agency, has not lived up to expectations in terms of responding promptly to crime incidents when they occur. Essentially, the central objective of policing is to provide security or at least social and psychological feeling of security, for a majority of citizens, in a majority of places.

Contrastingly, the failure on the part of government to put roads in proper motorable conditions, as to increase the speed of accessibility, during crime incidences, is also contributory to these criminal situations. Safety is an indispensable condition for growth, development and stability of any society.

However, the blight of kidnapping in Nigeria will continue to aggravate due to the gravity of unemployment that has rendered many skillful graduates to become jobless which drive them to desperately looking for a way to survive. As a matter of concern and collective responsibility, this root cause must be evaluated and addressed in order to eliminate this terrible scourge once and for all.

Alao Abiodun is a Journalist, He writes from Lagos. Tweets @Kingbiodun_