ADAEZE, STEVE RHODES' LAST CHILD, IF ONLY DAD WAS ALIVE TO WALK ME DOWN THE AISLE 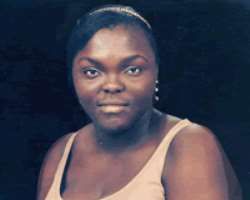 Adaeze
Adaeze is the last of the four girls of the late Steve Rhodes. Quite unlike most girls of her age, not only does she look more matured and bigger, she has done what many of them have not done. Leveraging on her family background in creative arts, Adaeze who is a full-time employee of a film production company has her hands in many pies. At 21, she was into painting, sewing and making of beautiful jewellery.

Adaeze, whose mother separated from her father when she was a kid, grew up living with her sisters and father. As the last child, her closeness to her late father was understandable.

When her father passed on, she couldn't believe it because death was never in her mind. She didn't think the old man would ever leave her. Two years after, Adaeze remembered her father with fond memories. She took Daily Sun down memory lane:

Growing up
'It was fun because like I am the last child. I would say that I got the best from everyone even though, at times, I don't admit that, but it is fun. My mum had been separated from my dad since I was a kid and so my sisters were like my mum. They perfectly played the role of mum to me. I grew up watching my dad working with the Steve Rhodes Voices. He was always so engrossed in his productions so I really learnt a lot from him.

'I got attention from everyone. My dad and sisters were all there for me. They all love and pet me. My sisters were more like parent figures in the house. I could look up to them for advice and support. But more importantly, living with a man like Steve Rhodes was a big fun. I learnt a lot from him. He taught me discipline and patience. He taught me how to work hard. As someone who was in the entertainment business, he was always busy and engrossed in his arts.'

Was he so busy that he wasn't there?
'No, certainly not. Although, he was busy, but he still made out time to be with his family. He tried his best to be there and whenever time permitted him, he lived up to his billings as a great dad. He practically offered himself for us. For me, I went everywhere with him. I attended musical concerts with him. There were times I would be with him the entire day as he worked. And because of this, I was nicknamed his 'hand bag.' Of course, he couldn't stay at home and pamper me, but I was with him half of the time.'

Where was your mum all the while?
'My mum is there but I don't live with her. I grew up living with my dad and my sisters. Of course, my mum is still in the picture.'

What do you miss about your dad?
'I certainly miss his advice. We used to talk a lot. He was more of my friend. Watching him work and create some stuff was huge fun for me, but I do miss the way we used to talk. We could talk about just about anything. I could meet him for anything. If I had a problem, I went straight to him and would say dad, I need this, I need that or that I didn't know how to do this. Although, I might not want to do that initially, but eventually when I did, he always came up with brilliant responses and good pieces of advice. I do miss all that.'

Would you recall one of the best pieces of advice he gave to you?

Didn't you think that as an old man, he was talking too much?

'Yes, there were times, I would try to relax over those pieces of advice and tended not to bother much about them and probably say there would be no consequences.'

How close were you to him?
'We were very close, indeed. Apart from the time I was away at school because I was in boarding school, I was always close to him. I would keep awake and sit up waiting for him to return. He kept late nights because of his numerous engagements. Anytime I couldn't go with him or something happened, he normally called me to know where I was. Same thing he did when I was in school, he called me every time. I was really fond of him. He was one of my greatest confidants.'

Did it ever cross your mind that he would die?
'He had cancer. Yes, he was always open about his health, about dying and everything. He knew that he wasn't a young man, after all. For me, I made sure that I spent as much time as I possibly could. I knew that he was old even though, there were times I would practically forget about his age. Amazingly, he didn't act as such though sometimes I simply wondered if he would ever die. In some instances, people would have to remind me that this man was not growing younger. He was so full of life, so hard working and kept a good lifestyle. Maybe, all that was just deception.


Adaeze
'He didn't hide himself from us. I didn't know about the cancer though, my sisters knew about it before me. I think he didn't want to tell me or maybe didn't know how to tell me. When I found out, it was okay but I never really thought about death. For heaven's sake, he was my dad and how could he just leave us like that? No, it never really crossed my mind.

Maybe you thought that daddies can't ever die or what …?

'Not really, but it never bothered me one bit. Of course, death wasn't in the equation at all. I'd always thought that here was my man and that he would always be there and come on 'how would he ever go away from us?' You know, that kind of feeling.

So, when he passed on?
'Yeah, when he passed on, I was here in Nigeria. He was in London and all my sisters were with him. He didn't want me to go with him, but we kept talking on phone. He died two years ago on Democracy Day. He was away for a month. 'It was funny indeed. When he was travelling, I didn't see him off to the airport. Someone had to stay at home and I did. It was odd somehow, I can't forget it. Usually, I would be excited whenever we were saying our goodbyes and he would tell me not to worry that he would be back and all other things.

'This particular day, I would simply say, 'dad, make sure you come out of it.' He actually promised he would return, after all 'I have work to do anyway.' There was a note of assurance, but he was cold about it. No excitement, just somehow solemn. I didn't quite understand and we gave the usual hugs, kisses and pecks and he left.

I spoke to him quite often to find out how he was doing. After he went in for the operation, he was in a coma so I couldn't talk to him anymore. My sisters kept me informed of the development. He was actually doing well, but suddenly that night, everything just crashed.'

How did you receive the news of his death?
'It was on a Friday. Yes, and I didn't go out. I was just indoors and to worsen it, I had lost my phone a few days before that day. Everyone else had apparently heard the news except me. I guess he died about 2 o'clock so it was in the news. Many people had heard about it and were making calls, but I didn't know because I lost my phone and there was no light so I had no idea.

'A while later, my brother-in-law came in and announced that I would have to go to my auntie's place to stay. I wondered why and when was the last time, I visited her. Well, I went with him. Death was not in the card at all.'

Did you think they were lying to you?
'No, not really. I think the problem was that they didn't quite know how to break the news to me. When we got to my auntie's house, I thought I was in for a pleasant surprise. Maybe, I was to receive a car gift or something I had been asking for. But my auntie started by saying 'well, this has happened. I wish it had happened to us since we are older.' Of course, my dad was their junior. That was how they broke the news.

'You should have seen me that day. I was perplexed. Initially, it appeared as if I didn't understand what they had said. I just went blank. First, it was a feeling of confusion and doubt. It didn't make sense. It took quite a while to sink in and when I finally found my voice, I said if they were joking, let it stop, but I would later realize that it was nothing short of truth. I tell you that up till now, I didn't cry like the others. I just kept laughing.'

Has seeing his images on screen after his death broken your heart?

'Well, yes. Once I was spending a weekend in a friend's house and right there on the TV, they showed one of his shows. There he was and I busted out 'ah, that's daddy' and I started crying and called my sister. It was so sad. I just wished he could jump out and tell me how sorry he was for having left me since then. I was so, so sad

'I miss him a lot. No day goes by without thoughts of him flooding my mind. His remembrance comes up on Democracy Day. Last year's memorial, we had a little get-together and the unveiling of the Steve Rhodes Foundation. We also went to the cemetery to pray for the repose of his soul.'

What would you have wished he did for you if he was still alive?

'Yes, I wish he was around a little longer. At least, I wish he was alive to see me get married. For me, one wish that will never be, is for him to just walk me down the aisle on my wedding day. Oh, how I had wished for me to walk beside him on my wedding day. I am not asking for much, just for that brief moment. Let him just walk me down the aisle in that brief ceremony. I would ask for nothing more. It really saddens me that I will never get to see that of him and it's rather unfortunate.'