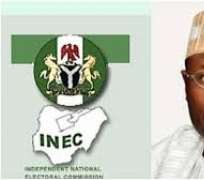 A day after the European Union released an extensively damaging reports criticizing the recently held general elections, a prominent Pro-democracy and civil Rights advocacy group- HUMAN RIGHTS WRITERS ASSOCIATION OF NIGERIA (HURIWA) has thrown her weight behind the factually correct reports and has called for the sack of the Chairman of the Independent National Electoral Commission (INEC) Professor Yakubu Mahmood for any meaningful and constructive electoral reforms to be actualized.

The Rights group said allowing Yakubu Mahmood who midwifed the rogue 2019 polls to stay on is like promoting a 'school principal' who supervised widespread leakage of a critical externally marked examination in which 50% of his Students were caught in the criminal act of cheating with the active connivance of the principal and other principal staff. HURIWA recalled that the last election was so criminally violated and wantonly rigged to an extent that over 40% of the results returned by the compromised Yakubu Mahmood have been voided and rendered a legal nullity by competent courts of law and election petition and appeals' tribunals all across the Country to an extent that the results of a whole Zamfara State validated by the electoral commission under the headship of Yakubu Mahmood were invalidated by the highest court in the land - the Supreme court of Nigeria. What is Yakubu Mahmood still doing as Chairman when the shoddy and shabby electoral heist he supervised has been discredited locally and globally?

HURIWA said it was shocking and disappointing that Professor Yakubu Mahmood who presided over the most brazenly manipulated and criminally rigged election in the political history of the African Continent which is what the 2019 general elections represent has refused to voluntarily bow out and resign from office for his spectacular and historical failure to conduct a free, fair, transparent and peaceful election even when he had over 4 years to prepare for the just ended polls.

HURIWA also noted that the conduct of the Yakubu Mahmood led INEC before the presidential elections petition Tribunal in which INEC denied deploying the technological transmission of results (electronic servers) which the electoral commission budgeted and got the facilities installed has shown that Mr Yakubu Mahmood has no business remaining as chairman of an agency that ought to be independent and operate as an unbiased umpire. How come that an umpire who claims to be unbiased be the party in an electoral petition that actively undermines and is frustrating one of the parties in the matter from accessing basic evidence to help the Tribunal reach an objective and just determination? This shows that INEC was an affiliate of All Progressives Congress during and after the widely disputed polls. An independent commission ought to be focused on helping the election tribunal to reach an objective and truthfully honest determination rather than be the megaphone of one of the contending parties in the petition before a competent court of law.

"A self-respecting academic professor would on his own volition quit from office in any sane government and civilized nation the moment it becomes notorious that he has failed to discharge the public functions and duty for which the Nigerian State invested multibillion dollars of public fund to enable a constitutionally independent body like the Independent National Electoral Commission (INEC) to perform. But this discredited Chairman of the most notorious electoral panel in Africa Professor Yakubu Mahmood has continued to pontificate and parade about as the Chairman of an agency that was sold and bought. It's a shame that the Chairman of INEC under whose watch over 150 potential voters and electoral officers were slaughtered by political thugs affiliated to the central government has refused to show dignity and conscientiousness by quitting his job to allow for a fresh head to steer the ship of affairs in INEC. This INEC that has shamelessly failed to pay the allowances and wages of youth corpers who worked as ad-hoc electoral officers is the same that is pretending to be interested in any transparent reforms of the decadent electoral system. This is comedy taken to an unimaginably farcical but offensive dimension".

HURIWA said in a media Statement by the National Coordinator Comrade Emmanuel Onwubiko and the National Media Affairs Director Miss Zainab Yusuf that the just released reports of the European Union's 2019 Election observations were not far reaching enough in as much as the reports dovetails into the equally factually scientific evidence of how hundreds of Nigerians were violently killed during the elections and millions of Nigerians were deliberately disenfranchised by the Yakubu Mahmood led Independent National Electoral Commission (INEC).

HURIWA accused Yakubu Mahmood of systematically disenfranchising millions of Southern Christians as a way to reduce the voting power of the South whereas children as young as 6 known as almajiris in the core North were registered and allowed to vote. Yakubu Mahmood is a Northern Moslem irredentist appointed to execute a regional agenda which he executed so recklessly and mindlessly.

HURIWA stated that: “We agree totally with the conclusions of the election observations made by the EU election monitoring team that watched the 2019 polls to such an extent that the reports highlighted the state sponsored violence that marred the polls and the lack of openness and transparency by the Independent National Electoral Commission (INEC). We also accept the EU's observations about the misbehavior of some rogue armed security operatives and their officers who were deployed by politicians to kill, maim and destroy many lives and electoral materials in the areas that the leading opposition Peoples Democratic party (PDP) was coasting home to victory in both the National Assembly, governorship and Presidential polls. The violence in Lagos, Rivers, Bayelsa and Akwa Ibom were so well coordinated to such a level that only the Federal Government with such overwhelming federal might and control over the security forces can so abuse their powers to destroy the credibility, integrity and independence of the just ended National Election and most specifically in the Presidential election".

“HURIWA agrees with the conclusions of the final reports of the European Union Election Observation Mission (EOM) to Nigeria for the March 2019 general election where it said a combination of factors, including incumbency, suspension of the former Chief Justice of Nigeria (CJN), Justice Walter Onnoghen, a few weeks to the election, and violence shaped the poll’s outcome but the EU did not go far enough and did not call a spade by its name may be in a bid to appear to be politically correctt as most diplomatic missions would. The EU report said Onnoghen’s suspension did not follow due process. And it alleged that over 150 people died in the violence that characterized the elections. We had consistently maintained that the last elections became increasingly marred by violence and intimidation, with the role of the security agencies becoming more contentious as the process progressed because these tendencies were so noticeable that at a point in some parts of Nigeria like in Lagos the armed thugs paid by All Progressives Congress (APC) PRACTICALLY stopped voters of South East origin from accessing polling booths even as the security forces were teleguided and directed from Abuja to do nothing to stop these hired armed party thugs from stopping Igbo voters from exercising their right to vote because of widespread apprehension within the Presidency then that the Igbo block votes in Lagos will undermine the plots of the ruling party to coast to victory seamlessly but the APC adopted raw violence and bloodshed. The national leader of APC was seen with two bullion vans reportedly conveying raw cash on the eve of the Presidential polls which were suspected to have been deployed to influence the conduct and outcome of the Presidential poll but EFCC working for APC looked the other way but refused to act even when the money laundering law specifies the sealing or limits of cash that an individual have physically at a time".

HURIWA said: “ We also read the recommendation for electoral reforms from the European Union Election Observations team which maintained that such reform needed political leadership that is dedicated to the rights of Nigerian citizens, and an inclusive process of national dialogue involving state institutions, parties, civil society and the media and HURIWA read with intensed joy the recommendation by EU that these sets of electoral reform needs to be urgently undertaken to allow time for debate, legislative changes and implementation well in advance of the next elections. Unfortunately, the European Union did not remember that the 2019 polls were manipulated not by the electoral laws or lacunae in any of the electoral laws but these manipulative and criminal tendencies to rig the polls or instigate violence and killings were carried out by human beings and the Independent National Electoral Commission (INEC) has a leadership that is weak and compromised ethically to such an extent that a body already granted autonomy and independence by the constitution was turned into a rubber stamped agency of the All Progressives Congress by Yakubu Mahmood who was appointed by President Muhammadu Buhari's administration and left to ruin the polls even when it became evidently clear that he was partisan and lacks credibility and was predetermined to return the incumbentPresident elected against the popular votes of the electorate"..

"This is why as the European Union noted factually and we constructively agree that the entire components of the elections were marked by severe operational and transparency shortcomings, electoral security problems and low turnout. To save Nigeria from a possible civil war in 2023 the current leadership of INEC that is massively corrupt and compromised must be dismissed and replaced with Men and women of character and independence of mind".