School Proprietor Calls For Sack Of Permanent Secretary and CIE 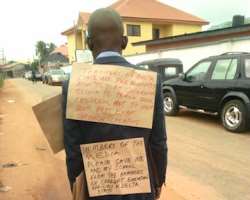 The Chairman, National Association of Proprietors of Private Schools (NAPPS), Oshimili north Chapter, Mr Carl Ofonye has called on Governor Ifeanyi Okowa of Delta State to remove the Permanent Secretary, Ministry of Basic and Secondary Education, and the Chief Inspector of Education (CIE) in charge of the council and also called for the cancelation of the BECE examination currently going on at Oruchi Comprehensive Secondary School, Okpanam and a fresh examination organized for all the students at the centre where a level playing field would be the order of the day.

Mr Ofonye who is also the proprietor of Skyset Group of Schools, Okpanam made the call during a one man peaceful protest to the Exams and Standards Office in Asaba, the state capital.

According to the Skyset Proprietor, the duo have been allegedly indulging in acts capable of derailing the good intentions and huge investment of Governor Okowa in the education sector in the state in the last four years and if left to continue, the huge investment by the peoples governor in the sector would go down the drain as a monumental waste of resources.

In an open letter to Governor Okowa, a copy of which was made available to The Nigerian Voice, Mr Ofonye alleged that the two officers had been supporting large-scale examination malpractices and also involved in collection of illegal fees from his students in secondary schools in the state contrary to the state government's positions on the issues.

You recall that some school heads in Delta State were sanctioned not too long ago by the immediate past Commissioner for Basic and Secondary Education, Mr Chiedu Ebie, who who has been re-appointed as Secretary to the State Government (SSG), having been found to be indulging in collection of illegal fees from students in the aftermath of investigations into the Success Adegor's scandal.

The SKYSET boss claimed in the open letter to the governor that despite the punishment meted out publicly to the erring school heads by the former Commissioner for Basic and Secondary Education, the Permanent Secretary and some CIE's in the state were still indulging in illegal collection of fees from students thereby bringing additional and untold burden to the poor masses of Delta State.

"It was on record that the then Commissioner who is now the current SSG, Mr. Chiedu Ebie took the decision to sanction some school heads because of established facts that they engaged in acts totally at variance with governor Okowa's vision and mission to lessen the burdens of the poor parents and guardians of students in the state".

The duo (Permanent Secretary and CIE, Oshimili North), he further stated are also involved in aiding and abating exam malpractices and other forms of fraud in the state.

Mr. Ofonye further claimed that his stand against the unwholesome practices in the education sector has now mapped him out for destruction by these two persons and others, including the president of NAPPS, Delta State involved.

Adding that the one man protest was to draw the attention of the Governor to the anomaly and to also let the world know the danger he is facing in the hands of identified persons and every one connected with the illegal activities.

On his part, a Director in the Ministry of Basic and Secondary Education Dr Moses Bragiwa while addressing the Protester urged him to furnish the ministry with more information in writing for further action(s).