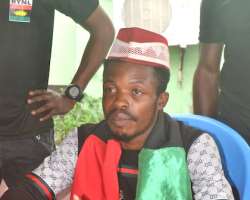 He said that the new development in political system of Nigeria such as the recent structure of the Buhari's government has clearly shown that the South east and South south geopolitical zones that they are not part of Nigeria.

"Is there anyone still in doubt that we are not Nigerians?. Is there anyone thinking the rejection of our people in the present government offices was because we didn't vote for them? That person should think again, whether we voted them or not, the odds will still not favor us. Their plans has been to weaken us politically but unfortunately these political harlots in our land failed to understand the handwriting on the wall" he hinted.

BNYL accused the apex Igbo group of playing double standards which depicts an act of cowardice in them "They don't know what they want. The song of restructuring has died a natural death. It is now begging for an ordinary SGF. We don't need it, let it be given to the North to rhyme with the powerful offices they have occupied.

The Easterners are not worried, we are more worried about the independence of Biafra which neither Senate President, nor President can give us. Freedom is not given but taken and we must take it by every means necessary".