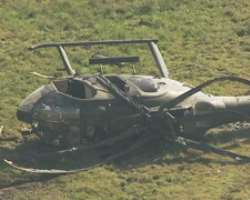 A helicopter of the Nigerian Air Force on Wednesday crashed-landed at the Umaru Musa Yar'adua International Airport, Katsina State.

The incident which occurred at about 3:00pm was confirmed in a statement issued on Wednesday by the NAF Director of Public Relations and Information, Air Commodore Ibikunle Daramola.

The helicopter is one of the air assets deployed for Operation Hadaran Daji.

It was returning from an anti-banditry mission in the North-West theatre when it crashed at the airport.

The airport, Umaru Musa Yar'Adua Airport, is located off Daura-Katsina Road in the state.

The air force said the details it had on the crash were still sketchy but pointed out that there was no loss of life, “either of persons on board the helicopter or on the ground.”

Daramola said the Chief of the Air Staff, Air Marshal Sadique Abubakar, had directed the constitution of a Board of Inquiry to determine the exact cause of the incident