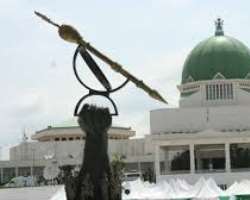 It takes some spiritual callings and fortifications to make some futuristic pronouncements and declarations; usually the exclusive privilege of prophets. From this foregoing, I do not qualify a bit to make any prediction as I am not a prophet nor a prophet’s son.

Developed countries have strong institutions which hold onto the tenant and statutory of the constitution- constitutionalism. Therefore, the independence of such institutions is sacred as there is no room for powerful individuals as it is the case in under-developed countries. It is never far from the truth that Nigeria has successfully produced too many powerful men that have eaten so fat and their weight is crushing Nigeria to her early, premature death. 9th NASS is not devoid of such men who are suffering from obesity as a result of over-feeding and their weight shall certainly crush the legislative arm and invariably Nigeria if drastic actions are not taken by Nigerians.

The former Governors and Dep. Governors are usually burden as most of them have never contributed meaningfully to debates or sponsored bills in the NASS. In fact, some of them hardly attend plenary sessions let alone debate issues because the House is just a guesthouse away from their states. They have gotten so much wealth that they look down on NASS budget as a child’s play but they smuggled themselves there to still have some political relevance and some powers to manipulate most of the corruption cases that usually hang on their necks after leaving office as Governors.

However, they get controversial on issues that antagonize their interest and they are ready to spend money like ‘fish’ in order to bring the matter to their favour. More so, they usually still want to be ‘the alpha and omega’ in their respective states especially to the stooges they have successfully installed while leaving office and this usually leads to chaos and underdevelopment of their respective states. 9th NASS shall not really make any meaningful contributions to make the lives of Nigerians better as the burden within is usually a force that is capable of crushing itself and surely shall pull some strings with their ill-gotten wealth and scuttle meaningful development.

LACK OF INDEPENDENCE
9th NASS shall not be able to function optimally with the deserved constitutional and political independence as it is quite evident that its activities take off on the note of political party and executive interferences. Considering the supremacy of party, nothing would have been wrong for the ruling party giving directives to its members on who should be their leaders in the NASS but it is absolutely and constitutionally wrong for the Executive and Presidency to dictate to the NASS who their leaders should be and it is the beginning of losing its independence in making decisive policies that will better the lives of Nigerians.

The theories of Separation of Powers; Checks and Balances as proved by Baron De Montesquieu and Rule of Law as proved by A.V Dicey were not just theories from the blues. These were theories that emanated as a result of the complexities in human existence and development which were intended to make the ruled and the rulers accountable, answerable and never to exercise absolute power as this corrupts quickly and leads to atrocities against humanity usually genocide is inevitable. Over time, history has shown how some individuals (Hitler, Stalin, Idi Amin etc) outgrew the laws, muzzled the laws, distorted process of the law and gagged institution of the law and eventually this led to destruction of lives and property. This is evident in WW1, WW2, and Rwanda Genocide etc. As a matter of fact, “Power Corrupts Absolute Power Corrupts Absolutely” Lord Action (1887).

The height of the bossy interference was displayed by Mr. President of the Federal Republic of Nigeria, Mahammadu Buhari when he had a closed door meeting with Ahmad Lawal and Danjuma Goje (Senate Presidential aspirants), emerging from the meeting Goje announced his withdrawal from the election. I am not saying lobby, persuasion are no longer diplomatic tools needed in democracy but it is mind boggling that some hours later after Mr. President involvement in this whole saga, the Economic and Financial Crime Commission (EFCC) suddenly withdrew from Goje’s corruption case of #26b (twenty six billion naira). The masses suffer when political offices become a tool of negotiation, persuasion and pacification and it is a sad development for Nigeria and the Senate leadership should be ready to be gagged as there is always a time to pay back ‘Greek Gift’ that usually comes with strings as 9th NASS already took the walk into lack of independence through the godfather-President that wanted some particular candidates over others- the beginning of rubber stamp NASS.

Likewise, similar act occurred in the race to the leadership offices of the House of Representatives, people have been bought over, threatened and promised and this eventually worked out according to Presidency’s desire and the political gladiators within the folks of the ruling party, APC.

9TH NASS AND RACOUR
9th NASS shall not be devoid of rancors rather rancors shall court 9th NASS just like the previous ones, not necessarily because of the assemblage of men and women but necessarily because the seed of rancor has been sown by the unnecessary interference of external bodies in the election/selection of 9th NASS leadership. Ali Ndume might have ostensibly and defiantly contested and loss with 28 (twenty eight) votes as against the winner, Ahmad Lawal with 79 (seventy nine) votes but Ndume remains a force in 9th Senate who despite losing could still pull some strings that are capable of destabilizing the Senate. I foresee a situation where the vindictive chairman of APC, Adams Oshiomole shall as usual use his ‘tout’ strategy to sanction Ndume which shall lead to rancor within the party and 9th Senate. 9th Senate leadership would also see Ndume as a spent force hence, his non involvement in Senate caucus matters and this shall be detrimental to the stability of the 9th Senate.

In like manner, the shocking nomination of Ike Ekweremada for the office of Dep. Senate President and his eventually loss to Omo Agege is another point of rancor. Even though, it’s evident that not all the PDP members voted for their own man but it shall remain a reference point in supporting or opposing issues in 9th NASS. More so, Omo Agege is never a saint as posterity waits to judge him bitterly even in the hands of the APC members over the snatch of Mace in the 8th Senate. Likewise, similar issues shall play out in the House of Reps as independence has been sold out and the power that be shall control its affairs from behind the scene. Umar Bago might have lost out but the battle line in the Green Chamber had just been drawn.

Rancor shall arise from the sharing of juicy committees’ posts as federal character shall not be respected and the SE shall feel alienated even when truly they shall be alienated and the PDP shall fight to keep the deal struck with Ahmed Lawal to become Senate President which is evident in the 79 (seventy nine) votes he garnered as opposed to the stance of the APC national chairman Adams Oshiomole, who does not want PDP sharing from the NASS juicy committees positions. Both houses shall have bloody plenary sessions as members shall often times involve in physical fights due to regional marginalization in committees juicy posts and unsettled matters arising from endorsements and counter-endorsements.

The likes of Dino Melaye Shall arise and the factor of ‘Dinos Likes’ shall trouble the water of 9th Senate and this shall also affect the House of Rep as they are more younger and exuberant. They shall throw blows and chairs and there would be blood on the floor. Eventually, there shall be impeachment in the leadership as many fall-outs shall occur even in the process of fight for independence and voice for the 9th NASS. Delay in budget passage shall cause rancor even beyond the border of Nigeria and this shall partly be caused by the delay in presentation of budget by the executive and ‘budget padding’ shall take another dimension as constituencies projects and allowances would dominate the floor of the 9th NASS.

Therefore, 9th NASS shall be a rubber stamp, a toothless bull-dog that cannot bite and it shall be so enmeshed in 2023 politics that the institution would forget its mandate and lose its focus. At the end, there shall be DISSAPOINTMENT more than the 8th NASS. Nigerians brace up!