*Warns Lawan that he will destroy Nigeria if he becomes a Presidency's stooge: Calls Senator Ali Ndume a National Icon of Democracy:
By Human Rights Writers Association Of Nigeria (HURIWA) 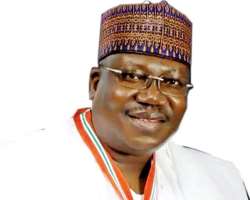 HUMAN RIGHTS WRITERS ASSOCIATION OF NIGERIA (HURIWA) the foremost civil Rights Asvocacy group hereby states without equivocation that the election of Senator Ahmed Lawan by the newly inaugurated senate as Senate President was relatively and comparatively free, fair, transparent and just and as civil rights activists we hereby endorse the process and wr state that the process is hereby accordingly applauded. His manifest zeal and relentless campaign seems to have paid off with a clear majority of over 76 senators voting for him.

What this victory which is overwhelming what it means is that his mandate is legitimate, contrary to the widely speculated insinuations that he may have peremptorily bought the votes prior to the actual conduct of the election inside and within the precincts of the hallowed red chamber of the senate of the Federal Republic of Nigeria.

Also, his election may have confirmed the widely circulated and anticipated aspiration of the leadership of two leading political parties’ for party supremacy to reign. It is victory for party supremacy and this is entirely in compliance with best global practices. Infact in Great Britain Parties with majority usually provides the Premier or Prime minister for the United Kingdom Just as ranking members of the parliament in the USA usually head the political party in parliarment.

However, we strongly commend Senator Ali Ndume for being a man, for being a champion of democracy, for his persistent resistance of executive suppression and imposition and for sticking out his neck to ensure that the genuine principle of democracy which is expressed in the popular saying that in democracy it is “one man, one vote” took the center stage. Although he came a distant second but he is indeed the symbol of democracy and freedoms.

Ali Ndume should be celebrated as a national hero. Ali Ndume from this day forward has become a national icon of democracy because he said 'NO' to authoritarianism and totalitarianism.

Ndume said NO to the desire of the reactionary elements in the polity to destroy the essence of democratial choice which is embedded within the context of voluntary choice and rational decision of the voters to cast their vote for the candidates of their choice and not because of fear and or expectation of pecuniary settlement.

We call on all patriots, statesmen and compatriots to so honor senator Ali Ndume and to stand by him and with him, and to speak out in the event that there could be an attempt from the vindictive executive who may come after him for standing up to defend the cause of what he believes in.

Democracy will die in Nigeria if Senator Ali Ndume is witch hunted because of his heroic role today. Our best advice to the president of Nigeria Muhammadu Buhari is to stick to the constitutional norms and pristine provision that guarantees separation of power encompassed in sections 4, 5 and 6 of the 1999 constitution.

The people of Nigeria must be vigilant to safeguard democracy at this trying time specifically because of the fact that the newly elected senate president Senator Ahmed Lawan had disclosed to HURIWA that actually he is President Muhammadu Buhari’s boy but he quickly stated that he will not accept to make the National Assembly a rubber-stamped legislature.

So we will hold him to his commitments to defend the Nigeria constitution and not to undermine the principles of separation of power or to coordinate the distortion of constitutionally guaranteed tenure limitation for the executive arm of government.

In effect, he Senator Ahmed Lawan made a commitment not to allow any third term gambit by president Muhammadu Buhari because Nigeria will collapse the day this senate will attempt to undermine the tenure limitation as provided for by the constitution of Nigeria which stipulates 2 terms of 4 years each and no more. Nigerians must stay awake!

HURIWA ACCEPTS THAT THE most common system that is deemed democratic in the modern world is parliamentary democracy in which the voting public takes part in elections and chooses politicians to represent them in a legislative assembly. The members of the assembly then make decisions with a majority vote. A purer form is direct democracy in which the voting public makes direct decisions or participates directly in the political process. Elements of direct democracy exist on a local level and in exceptions on the national level in many countries, although these systems coexist with representative assemblies.

HURIWA hereby reminds Nigerians that the term democracy comes from the Greek word δ (dēmokratía), “rule of the people,”which was coined from δ (dēmos), “people,” and κ (kratia), “rule,” in the middle of the 5th-4th century BCE to denote the political systems then existing in some Greek city-states, notably Athens following a popular uprising in 508 BCE. Other cultures since Greece have significantly contributed to the evolution of democracy, such as Ancient Rome, Europe, and North and South America. The concept of representative democracy arose largely from ideas and institutions that developed during the European Middle Ages and the Age of Enlightenment and in the American and French Revolutions. The right to vote has been expanded in many jurisdictions over time from relatively narrow groups (such as wealthy men of a particular ethnic group), with New Zealand the first nation to grant universal suffrage for all its citizens as stated in scholarly treatise of political experts.

HURIWA recalled that Senator Lawan is the Senate President by virtue of him Scoring 79 votes, Ndume 28 votes. After all 107 senators present voted, Lawan won 79 votes while Ndume finished with only 28 votes. He was immediately sworn in by the Clerk of the National Assembly, Mohammed Sani-Omolori.

After a roll call of the new senators was completed, Yahaya Abdullahi (Kebbi North - APC) moved the motion to nominate Lawan, and the motion was seconded by Adeola Solomon (Lagos West - APC).

Ndume was nominated by Ishaku Abo (Adamawa North - PDP), and the motion was seconded by Mpigi Barry (Rivers South-East - PDP).