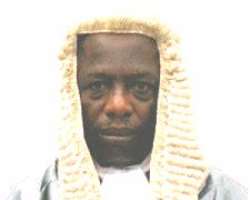 The inmates regained their freedom during a jail delivery exercise which the Chief Judge periodically undertakes.

The CJ shortly after the exercise told newsmen that he was empowered by the Criminal Justice Release from Custody Special Provisions Act, to do so.

Explaining further, he said: "Under that act, the Chief Justice of Nigeria (CJN) and the Chief Judge of a state have power to enter the prisons within their jurisdictions to conduct hearings in deserving cases.

"Under section 11A, the deserving cases are; THAT the detention of the person is manifestly unlawful or that the person detained has been in custody whether on remand or otherwise for a period longer than the maximum period he should have served upon conviction.

"It is under this section that the Chief Judge can exercise his powers by directing the officer in charge of that prison to release such people.

"It is not possible for the Chief Judge to release somebody who has been convicted already by a court of competent jurisdiction.

"It is also not possible for the Chief Judge to come and open the prisons for all inmates to come out; I don't think it is within his powers, we were very careful in deadling with cases like capital offences.

Mr Emeka Anosike, Chairman of the Committee for the Defence of Human Rights (CDHR), Ebonyi chapter, who filed bail application on behalf of the accused, said that the 70-year old has been on awaiting trial since June 27, 2018.

He informed the court that the accused was detained a year ago in prisons and has not been arraigned before a court of competent jurisdiction.

He also told the court that the suspect has no case file adding that information has not been filed by the Department of Public Prosecution (DPP) in the case.

He prayed the CJ to discharge the accused for want of prosecution or on the alternative grant the accused bail.

Mr Isreal Alaobu, the DPP said that the offfence allegedly committed by the accused was punishable under the Child 's Right Act of Ebonyi but did not oppose the bail application.

"We have not filed information on the case because the police have not made the case file available to us and consequently, we are not opposed to the bail application", Alaobu said.

The Chief Judge consequently granted accused bail on 'self' recognizance.

Nwuguru was detained at the facility since Oct. 16, 2014 and has not attended court.

Mrs Victoria Ebenyi who was wrongfully arrested in place of her husband who was accused of conspiracy and arson alongside 18 others and no charge was filed against her but has been in prison was also discharged by the Chief Judge.

Other suspects; Mr Chidi Onwe, Solomon Aleke, accused of unlawful possession of fire arm; Sunday Igwe accused of house breaking on awaiting trial for over 18 months, Uche Nwankwo and Chinonso Igwe among other inmates were released. Controller of Nigerian Prisons Services, Ebonyi State Command, Emelia Adaobi Oputa, in an interview commended the CJ for releasing the inmates noting that the exercise would decongest the facility which she noted was over stretched.

She urged the freed inmates to make good use of their new freedom and shun further indulgence in crime or criminality.

"I want them to appreciate the gesture, abstain from criminal activities and that they should go and 'sin' no more.

"The exercise will decongest the prisons which has a capacity of of 387 and currently admis 1,179 both convicted and awaiting inmates ", Oputa said.