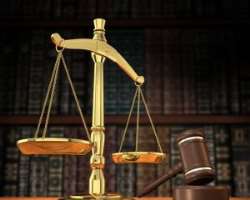 A whistleblower (name withheld), who exposed a secret account with a balance of $223m (N80.2bn) has sued the Federal Government and the Attorney General of the Federation for failing to pay him the N1.9bn commission promised him for exposing corruption.

In a suit filed before a FCT High Court vide a writ of summons dated June 7, 2019 by his lawyer, Aliyu Alemu, of Aliyu Alemu and Co, the whistleblower prayed the court to compel the Federal Government to fulfil its promise.

In the writ of summons, which was brought under the undefended list procedure (Order 4 Rule, Order 21 Rule 1 of the FCT High Court Civil Procedure Rules 2018), the plaintiff asked the court to order that he was entitled to be paid by the Federal Government and AGF the sum of N1, 914, 794, 676 being the whistleblower reward accruing to him.

He also asked the court to direct the defendants to pay him the money immediately and order that a post-judgment interest in respect of the commission at the rate of 10 per cent per annum until the final liquidation of the N1.9bn.

The whistleblower also asked the court to order that the sum of N10m be paid by the Federal Government as legal fees for filing the court process.

In the affidavit in support, the whistleblower said in June 2018, he informed the AGF of the existence of a bank account with $223m bearing the name 'NNPC Brass LNG INV. Fund' with number 1750027157 domiciled in Skye Bank (now Polaris Bank).

The money was kept in the bank in violation of the Treasury Single Account policy of the Muhammadu Buhari government.

The Group Managing Director of the NNPC, 14 persons (all NNPC officials) were listed as signatories to the account.

Upon reporting the matter to the AGF, the whistleblower was said to have been referred to the Special Investigation Panel and briefed the team on his findings.

He subsequently accompanied members of the panel to the bank where top officials were arrested.

Members of the bank's board were also invited by the panel where they were said to have complained that transferring all the money to the CBN in one fell swoop would affect the bank negatively and pleaded for the option of paying in instalments.

After playing his part, the whistleblower signed a bond along with the AGF, which was witnessed by Ladidi Mohammed, Head, Asset Recovery and Management Unit at the AGF's office.

The whistleblower said in his affidavit that despite putting his life and the safety of his family at risk to expose corruption, the Federal Government failed to honour its pledge.

He said the letters he wrote to the President, AGF and other relevant authorities didn't receive a favourable response, hence he decided to take the matter to court.

Attached as evidence are the agreement he signed with the AGF, a letter written to the President, the statement he wrote in the AGF's office and a sworn affidavit.