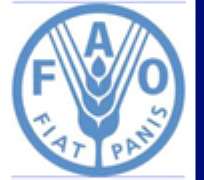 Food and Agriculture Organisation (FAO) in collaboration with the European Union Trust Fund (EUTFund) has commenced distribution of 2,000 bulls this year 2019 to 2000 to youths in Borno state and will end in 2020.

A statement issued Friday night by Suffyan Koroma, the FAO Representative in Nigeria said the scheme was aimed at building the economy of the 2000 youths in Borno State.

She emphasized that youths employment was perhaps the most important weapon to deradicalize the youths as it is crucial to sustain peace in North eastern region.

According to her, as at May 2019, FAO has already distributed bull to 450 youths in Jere, Konduga, Mafa and Dikwa Local Government Areas of Borno State.

“Through these bulls and other livestock, the livestock value chain in the state, which has been affected by the conflict, can be restored and youth will be at the helm of this restoration.”

“In Borno, conflict-affected youths are being supported for employment and income generation through an agriculture support programme funded by the European Union Trust Fund.

"As part of the programme, the Food and Agriculture Organization of the United Nations recently launched a massive livestock restocking campaign, chiefly targeting vulnerable youth and women in the State.

"24 000 pullets will as well be distributed to 2,000 women in the state, each woman will get 10 pullets and two cockerels. These inputs will significantly contribute to the restoration of agricultural livelihoods in the state, boost household nutrition and income generation.”