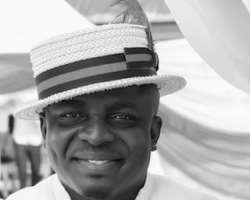 An advocacy group, "Not Too Young To Lead" with its headquarters in Delta State capital said the group sells hope and instills good morals on youth without necessarily having affiliation with them.

The group which concern is to raise youths with content, leadership sagacity and unquestionable character said when a youth is engaged or meaningfully empowered, such a youth becomes a veritable tool for positive change.

Speaking in this exclusive interview Tuesday in Asaba, leader of the advocacy group, Elvis Akpobi, popularly known as Hon. Major, said "There is nothing more powerful as an inspired and motivated youth. Likewise there is no force that is more dangerous than a youth who is hopeless and helpless", stressing that the group teaches and impacts good morals on other youths.

According to him, the hopeless and helpless youth is "a ticking time bomb", calling on the rich to give comfort to their neighbors, "I keep telling pneceddaeople that you claim to be comfortable with your children, have you thought of the environment where your children will stay if people are not comfortable.

"What basically we are doing is trying to sell hope. If Elvis of that day that is not from a rich home can get to this stage without doing anything negative, it means anybody can. Aside pushing for youths to be given privilege to harness their leadership potentials, everybody mustn’t make it through politics.

"The late CEO of God is Good Motors he taught the son and today the son is managing, he has even rebranded the place. That is a young leader because we have workers under him. We have young CEOs everywhere that are doing very well. There are young people that are doing very well in the private sector. They are leaders. So, what we are basically pushing is for youths to believe in themselves, stay independent and be useful to the society they find themselves".

He disclosed that the group by reducing moral decadence that have eaten so deep Into the society.

Hear him: "We have achieved a lot of results. Firstly, I use myself as the convener. I’m a thermometer for measurement for other youths. I preach morals. I can’t head Not Too Young To Lead and someone sees me doing cultism. We’ve done a lot of lecturing on anti-cultism and human trafficking. We’ve trained persons in tiling across the three senatorial districts of the state.

Speaking further, Akpobi hinted: "We are training three youths from Thursday to Saturday on solar panel. It’s only three persons we afford for now. The training is expensive, so we are picking one person each from the three senatorial zones without sentiments. Before now, we have trained about 15 persons on IT. Those guys are doing very well. We should not just be complaining about the leaders, you should play your own role in building the nation. You find out that government will build a fine place but the citizens cannot maintain it. We complain our leaders are bad but we forget that it is ordinary citizens that later become leaders. If you are not a good citizen, you cannot be a good leader".

Aked if their current engagement is not a way far from the the vision setting up the group, he said: "No, not a diversion. Our clamour is for young persons to be in governance basically, but you can’t politicize everything. There are still persons you are doing well and role models in the private sector. If it is only in governance, everybody is depending only on politics. There is Not Too Young To Run which we work with up in Abuja, we relate. He tells us how he does his own.

"Leadership is a 360 something, as a leader, you have to be example to your followers. We have been able to get young local government area chairmen, we are not just clamouring for young people, we are coming for young people with brilliant ideas, with content. We are going for young people that will give leadership an enviable height", the visionary leader of the group added.