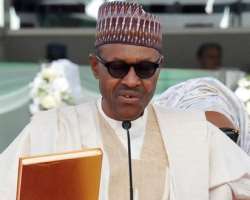 After a hectic, challenging and most eventful electioneering campaign season spanning between late 2017 to the conclusion of the general elections in March 2019, Nigerians witness yet another transition of power (in some quarters) or continuity (as the case is with the president). The just concluded general election was one of the most challenging Nigeria ever had; muddled up with confusion, unnecessary litigations, sheer show of force, and impunity.

Those declared winners never clinched to such victories on a platter of gold. In fact, no single political party nor their candidates were so sure of winning at all fronts. This clearly shows how unpredictable Nigeria's kind of democracy can be despite parties manifestoes, campaign agenda, and even candidates’ résumés.

It is a global practice for leaders assuming new responsibilities or reappointed (or re-elected as the case may be) in continuity to objectively and painstakingly give an inaugural speech. Such speeches are broadly characterized by a show of appreciation for the followers or masses’ support during the election, the successes and achievements of the previous term (for those re-elected), and finally the agenda for the new term; making frantic and feasible promises in order to fully endear the followers to the new dispensation with total trust and confidence.

Nigerians at home and in the diaspora were eager to know what Mr president has in stock for the nation in the next four years of his reign, but most surprisingly, there was no inaugural speech. Alas! The president wasted this golden opportunity.

With the unprecedented insecurity in the country, the president’s speech would have given Nigerians assurance of their safety and guaranteed security of their properties.

The president would have offered an olive branch to his main challenger in the just concluded election. The president would have informed us of his willingness to have an all-inclusive government, involving capable Nigerians in spite of party affiliations. A call would have been placed by the president to all dissenting voices and opposition parties to rally round and support him in making Nigeria great again.

This was an opportunity for the president to reassure Nigerians that he belongs to everybody and he truly belongs to nobody since it is widely believed that he is sectional.

With the agitation in the southeastern Nigeria, this was an opportunity that the president would have used to invite all Igbo sons and daughters to rescind the call for a Biafran State. The president would have genuinely notified the Igbos of their relevance in Nigeria’s growth, development and unity. He would have given them an open invitation for dialogue and discuss rather than total militarization and crackdown.

This was an opportunity for the president to give hope to thousands of unemployed youth in Nigeria. He would have shown his concern about their plight and proffer possible solutions his government is conceiving.

Unemployment fuels a lot of vices and crimes in the society. The president would have addressed the problem of kidnapping, been a blossoming evil in Nigeria today. Hope would have been given to the families, friends and relatives of thousands of people kidnapped and held bound across Nigeria. Efforts by both the government and the security agencies would have been reeled out by the president to assuage the fears in the minds of Nigerians.

The president missed the opportunity to sincerely refute in totally the claim of his Fulanization and Islamization of Nigeria as widely believed in different quarters should this claim be false.

Also, the lingering heinous acts perpetrated by bandits across northwestern Nigeria, including the president’s home State would have been captured in the president's speech. Latest efforts and lasting approach by the government to end this evil against the citizenry would have been clearly mentioned. As for the Boko Haram insurgency, the presidents would have empathized with the northeasterners and assure them of total liberation from these insurgency groups.

The continuous hostage of the only Dapchi Christian girl, Leah Sharibu and other Chibok girls by Boko Haram would have also made the president’s speech. Parents of these girls would have been given renewed hopes of their children's released.

The president would have gingered the morale of our gallant troops and security personnel. Several of them paid the ultimate sacrifice defending Nigeria. Hope and comfort would have been given to the families of the fallen heroes.

Mr president would have addressed the lingering fuel subsidy saga. The diversification of Nigeria's economy, special intervention programs, agriculture and the sincerity of his anticorruption crusade, since most opposition political parties regard such as witch-hunt of key opposition figures. Several other sensitive and current societal issues would have been captured in the president's inaugural speech.

Although the president’s handlers may defend his 2nd term inauguration speechlessness tooth and nail, indeed a bad precedent has been set in Nigeria's democracy. And President Buhari will forever be remembered for this.

In their defense, they may also argue that the president's speech is reserved for the forthcoming democracy day. This will also be unfortunate; since inauguration and democracy days are two different events connoting different meanings.

Although I do not believe that our leaders should always read bogus and rehearsed long-lettered speeches that lack the touch of present societal realities, the president would have at least spared 5-10 minutes for a succinct inaugural speech.