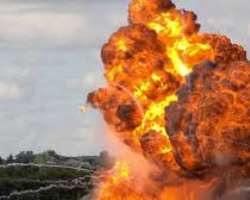 Police authority in Imo on Thursday confirmed that a bomb exploded in the state killing three persons.

Ikeokwu gave the names of the victims, as Elvis Ukado; Kasiemobi Uzoma and Justice Adie.

The police image maker said: “It was as an unexploded ordinance in a scrap dump.

“The bomb exploded killing three of them at the scene while one of the victim was beating the scrap iron in order to compress it.”