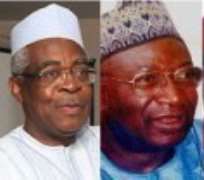 The Christian elders, who blamed Lord Lugard for sowing the seed of ethno-religious crises and dichotomy between Northern and Southern Nigeria, and urged deepening of democracy and rejection of sharia, stated their position in a paper dated June 3 to the All Party Parliamentary Group for International Freedom of Religion or Belief, APPG, UK Parliament.

Titled: “Competing Ideologies of Democracy and Sharia in Nigeria; The Nuance Understating of the Drivers of the Conflict in Nigeria by Farmers and Herders,” the paper was in response to the request of the APPG for written submissions to its inquiry on ongoing violence between farmers and herders in Nigeria.

They cited the prevailing waves of insecurity and quoted President Buhari’s pre-2015 comments supporting the sharia movement, “why he could die for the course of Islam, why they could not be blackmailed into killing the sharia idea, why sharia must be spread all over Nigeria, why Boko Haram members should be given VIP treatment and not killed, and why Muslims should only vote for those who will promote Islam” among others to back their claim.

“The action taken so far by the government suggests collusion or cover up by refusing to call jihad by its proper name. When a crime is committed and acts of subjugation and/or humiliation is added such as rape or religious signs or cries, this is jihad. Because the violence is motivated by ideological reasons, action taken by all interested parties must be directed towards the prevention of violence. Bullets do not kill ideology; it is a better ideology over time that can eliminate Boko Haram and Fulani herdsmen and this is Democracy,” they said.

“British man on the spot, Lord Lugard promoted Islam by preventing proselytizing in Muslim areas of Nigeria especially the emirates. Lugard was in love with Muslim North especially the Sultanate of Sokoto, for their contribution towards the war effort. He further created Northern Nigeria Corporation which Turkey did not offer as reasons why the Muslim North was entitled to special treatment and, above all, he (Lugard) was a disgruntled “suitor” who seemed to have lost his faith in Christianity before he got married to Miss Flora Shaw.

He hated educated black people and the South had many of them by 1914 dispensed with during a period of racism. Lugard created Muslim Northern Nigeria and annexed (not amalgamated) Southern Nigeria to provide access to the sea and sustenance for Muslim North. He would rather have traditional leaders to rule, than educated Africans. He ensured this, even after retirement from the colonial services.

“At independence, the British saw Islamism creeping into Nigeria and tried to make up with Human Rights in the Constitution.

“At the same time the British government ensured dominance of the North in terms of size as against the South that was divided into East, West and, later Midwest.

“Democracy was agreed upon by all the parties, North, East and West during the Independence Conferences but the Intelligence Department was structured to promote Sharia as an alternative source of legislation.

“At independence in 1960, the first law enacted by the Parliament was the Emergency Act of 1961. This was a strange way of celebrating freedom. This law was followed by a contrived Emergency in Western Region in 1963 resulting in the Western crisis of 1965 and the coup of January and July 1966. The July coup was a jihad that resulted in the killing of innocent Nigerians especially the Ndigbo who were mainly Christians.

This jihad resulted in the pogrom that led to the Civil War of 1967 – 1970. The jihad continued with the Maitatsine riots which was supposed to be between Muslim sects but in reality provided an excuse to attack and kill Ndigbo especially the shop owners and their shops were looted.

There was no correlation between Maitatsine and Christian shop owners. “Maitatsine” became an excuse for jihad against other Muslims to ensure that they fall in line especially in Bulunkutu, Jimeta, etc. Having subdued the North and moderate Muslims including the overthrow of Christian General, Yakubu Gowon and a moderate Muslim President, Shehu Shagari, today, 2019, Nigeria has a group of Christian Clergy (Mukharabat), men and women paid handsomely and granted national Honors, whose duties include speaking in defense of Islam and Sharia.”

Role of Religion
“There was a commission of inquiry in 1982 in Nigeria which discovered that the three persons named above introduced the doctrine and operational manual of Muslim Brotherhood into Nigeria. The Maitatsine inquiry showed clearly the use of state violence to quell religious fanaticism thus began the process of state force to bring other Muslim sects into line; the same was applied to El Zakzaky in 2016, a Shiite who was an ally of the Sunni in the 1970s to 1980s. It also provided political reasons for the dominance of Muslim North over Christian South. Shekau’s video “the religion of Allah not the religion of Democracy” in December 17, 2014 shows the role of religion in the crisis in Nigeria.”

Evidence of organized co-ordination
“The Intelligence Service is the only organization in Nigeria since independence that has not been subjected to a commission of inquiry. It was strengthened when Murtala Mohammed was assassinated and became an instrument for the “protection of Muslims and the promotion of Sharia.” The Intelligence Service constituted the “invisible government”. Evidence of this fact can be found in the leadership and personnel of the organization. The videos made by Boko Haram also showed organized co-ordination.”

Evidence of support
“A former Governor of Borno State started the Boko Haram and co-opted the head of Boko Haram sect, Yesufu into his cabinet. A member of NCEF and former Chief of Army Staff had to call on Nigerians to resort to self defense when the telephone of a terrorist was discovered to contain numbers of government and top officials in the Armed Forces. No commission of inquiry was set up, but a committee of the military was alleged to have found the military blameless. Today, all Ethnic Nationalities have been advised to resort to self-help. This is not evidence of an organized society.”

Disproportionate Number of Victims
“This can be attributed to various acts of “stealth jihad” by the Federal Government whereby arms in the hands of law abiding citizens mainly Christians were confiscated while the Fulani herdsmen and Boko Haram retain their AK47 rifles. When these terrorists are arrested, they are “re-habilitated” and sent back into the society. They are never prosecuted. See Buhari’s statement para 7(i) – (vii) below.”

Finance for Weapons
“The case of an arms dealer, a Nigerian who lives in Egypt was reported to the Department of State Security (DSS). The DSS did not carry out the directive of President Jonathan that the suspect be arrested and interrogated. Intelligence report in 2010, found (former governor of Borno) personal involvement in the recruitment, training and dispatch of Boko Haram fighters. During the period of Jonathan, the Islamists consolidated and the result is what is taking place presently in Nigeria. The DG SSS was accused by the NCEF of disloyalty to President Jonathan in a letter to that organization in December 2017.”

Evidence of collusion
“It is also clear that it is stealth jihad to have a Constitution that prohibits State Police even as money in billions of dollars is voted for vigilantes and religious police, thus rendering the Police weakened by stealth jihad while Boko Haram and Fulani herdsmen execute the conventional jihad. This is the conclusion that one can draw from these statements of President Buhari over the years below:

“I will continue to show openly the total commitment to the Sharia movement;”

“Why should Christians be concerned when Muslims cut off their limbs after all the limbs cut off are Muslim ones;”

iii. “I can die for the course of Islam, if necessary. We are prepared to fight another civil war; “

“We cannot be blackmailed into killing the Sharia idea. Sharia must be spread all over Nigeria.”

“Boko Haram members should be pampered and given VIP treatment but not killed. It is injustice to kill them;”

“That Muslims should only vote those who will promote Islam. “We are more than Christians if you add our Muslim brothers in the South-West.” Buhari was caught on video tapes before he became president in 2015.”

Action so far taken
The action taken so far by the government suggests collusion or cover up by refusing to call jihad by its proper name. When a crime is committed and acts of subjugation and/or humiliation is added such as rape or religious signs or cries, this is jihad. Because the violence is motivated by ideological reasons, action taken by all interested parties must be directed towards the prevention of violence. Bullets do not kill ideology; it is a better ideology over time that can eliminate Boko Haram and Fulani herdsmen and this is Democracy.’’

Action taken to prevent further conflict
“Knowledge, information and understanding. It took over 20 years of study to appreciate that the violence is motivated by ideology. All forms of distraction and propaganda are utilized to change the narrative: poverty, illiteracy, change of climate, etc. The truth is Sharia ideology is incompatible with Democracy. A multi-cultural, multi-religion and multi-ethnic country like Nigeria requires Democracy not Sharia.

Fake news
“Democracy and Sharia are no fake news. Those who cry fake news are those promoting jihad and Taqiyya, so as to provide an excuse for stealth jihad and the protection of jihadists. An Imam in Plateau State was rewarded for saving hundred of Christians from the jihadists which showed that not all Imams in Nigeria are Jihadists.”

Conflict primarily ideological
“The conflicting ideologies of Democracy and Sharia are responsible for the refusal of the Muslim North to say thank you to the Christian South for the growth and development of the Muslim North. To do so would contravene the tenets of Islam and Islamic supremacy over other religions and peoples. In the paper of the National Christian Elders Forum titled Testimony of Hope in Democracy of May 17, 2019, we suggested that Boko Haram and Fulani herdsmen are perceived solutions to what Northern Muslim elite and student groups saw as an instrument for solidifying an Islamic identity in the face of continuing Christian advances in Nigeria. It is time that the peoples of Nigeria and the UK appreciate that Democracy and Sharia is incompatible. What Nigeria needs is Democracy. It will be very clear that Sharia is no match for Democracy with respect to life being more abundant. Unfortunately, Britain seems to have been taken over by Muslims and very soon would need help, if they do not appreciate that it is an ideology (Sharia) that is staring them in the face.” – Vanguard.