Nigeria’s oil thieves back with a bang 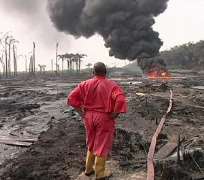 Just as Nigeria gets to grips with militants who brought the nation’s oil industry to its knees a few years ago, another group of longstanding foes are slowly making a comeback: thieves.

Saboteurs including thieves caused an 80% increase in the number of spills in 2018, Royal Dutch Shell Plc, the largest international producer in the West African country, said in a report last month. By contrast, there have been no militant-related halts to operations since 2016.

The disruptions underscore how hard it will be for Nigeria to fully rid itself of security challenges that have plagued the nation for decades. Overseas crude shipments represented by far the nation’s largest source of export income, with about $43.6 billion of sales last year, according to ITC Trade Map, a venture between the WTO and the UN.

“Oil theft is a severe drain on Nigeria’s revenue,” said Cheta Nwanze, the head of research at SBM Intelligence, a Lagos-based consultant. “The losses to theft could easily fund Nigeria’s budget deficit.”

On one level, theft is probably a more palatable option for Nigeria and the companies operating there than attacks by militants. About 100,000 barrels a day are being taken out of pipelines, whereas militancy halted at least eight times that amount at one stage three years ago.

The increase reflects a belief among local communities that multinationals don’t really own the barrels in the first place, according to Ledum Mitee, a lawyer and minority rights activist.

“They believe the oil is theirs and the government is the thief,” he said. “People now realize that instead of just cutting pipelines to spite the government, they can make money out of it.”

It’s also akin to an industry. Theft employs at least 500,000 people in the country, according to Mitee, former head of the Nigeria Extractive Industries Transparency Initiative.

Much of the stolen crude is processed in tiny, makeshift refineries comprising hundreds of cauldrons, each of which can hold as much as 150 barrels of oil, according to Nwanze. The world’s biggest refineries handle more than 1.2 million barrels each day.

Unlike politically-driven militancy, where fighters say they represent impoverished people in the Niger Delta region, stealing crude is considered a less risky option for those involved.

Multiple incidents of force majeure, a legal measure that allows companies to forgo their contractual supply obligations, have happened this year in Nigeria — even if the precise causes often remain unclear.

Aiteo Group, operator of the Nembe Creek Trunk Line to Shell’s Bonny export terminal, has been one of the hardest hit this year, halting flows through the link at least three times since January.

Chevron Corp. has also reported problems with third-party interference on its production facilities.

The rogue refineries, essentially scaled up versions of widespread gin distilleries in the region, typically employ about 100 people working in shifts. Yields from a single cauldron will include 7,500 liters of diesel, 2,000 liters of gasoline and 500 liters of kerosene a day. It costs about 4 million naira ($11,100) to construct a boiling pot.

“Oil theft is rife because there is an economic gain to be made from it,” Kachikwu said. “So we want to shut those illegal gains by creating positive and legal economic opportunities.”