Showpiece Any African Community The World Can Be Proud Of 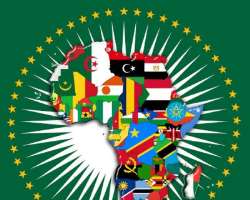 Individual achievements without carrying your people along is nothing to cheer about. What many Africans worship, admire and desire most is everything foreign to them: culture, religion, language, schools, awards, degrees, countries’ aids and loans to pay outrageous emolument to politicians that rival Pastors in creating and exploiting poverty for self-aggrandizement. If you cannot save yourselves in your own places of birth, who is going to help you, foreigners or God?

Heaven helps those who help themselves. Vanities and elephant projects turn into rumbles but human value and ingenuity build and reinvigorate. By taking one step at a time as revitalization of one village, city or country since the Great Empires of the 9th to 14th centuries; survival of the next generation could have been guaranteed.

True son of Africa does not point to their place of birth with a left finger. Geniuses can come out of Environmental dumps. Marcus Garvey, Civil Right Activist had formed Back To Africa Movement with the strong belief that, left alone, black people are can prosper within their own communities by trading and business enterprises between African communities or countries.

It is important to point out that appreciable progress continued from the 1950s with great hope that Nigeria would become a regional power. But since this new obsession with anything foreign from the 1990s, dependence on foreign income derailed and killed local initiatives as importation of used, new goods and services increased beyond redemption and self-control. Aggravated by champions and “experts” of Structural Adjustment and later, Devaluations.

Apart from the great African Empires in the 9th to the 14th centuries, Ghana the old Gold Coast demanded and got Independence in 1957. Western Region in Nigeria under self-rule, rose to unprecedented prosperity from the 1950s to 1970s. It was a time when blacks anywhere in the world could come home or point to an African community managed by Africans with many Firsts in African business, trade, education and sports since the ancient Empires.

When Ghana gained Independence in 1957, Diaspora Africans such as W. E. B Du Bois came back to Ghana; Darney Alexander served and later became the Chief Justice of Nigeria. Those were days when Diaspora Africans were longing for a home in Africa instead of Africans youths running away from home today. Our pride was not as first in foreign countries but first at home and mastering our destiny in our own places of birth.

It was when most Africans would not dare stay a day longer after their studies in any overseas Country. Most people familiar with Ibadan history as the seat of prospect, development and riches where capable leaders ruled, compete to rule and be associated with in Diaspora; apart from Lagos, Kumasi and Nairobi. Prominent African black achievers showcased their worth.

Before Americans and Europeans got their first blacks in powerful and noticeable positions, qualified Africans were statesman, professors, physicians, judges and engineers that came back as activists in Kenya, Ghana and Nigeria. When the Nigerian Government completed it 25 Stories Independence House, Western Region rivalled it with 18 Stories in Lagos. The 26 Stories Cocoa House in Ibadan was the tallest in Tropical Africa in 1965!

In the Western Region of Nigeria, industrial Estates flourished spilling into what is now Lagos State. There were booming housing estates, university towns, free education up to secondary level and free healthcare still beyond the reach of USA today. Western part of Nigeria included Mid-west later comprising of Bendel State. So, it was not just about a village or place at a time.

Everyone had the same benefit in the West, regardless of where they came from in Nigeria or Africa. Even in the early 1980s in Lagos, there were free education, free healthcare and mass housing; giving all, regardless of where they come from their first opportunity to own a house, get educated with free healthcare. Distractors called it cheap, the poor called it opportunities.

Nigeria embarked on eight elements of Primary Healthcare in all the 19 states in early 1980s. We accomplished 20 Health Clinics, 5 Primary Health Centers and one Comprehensive Health Center in each State. Trained Community Health Officers, Nurses and Health Assistance in the School of Health Technology. During the outbreak of Ebola in West and East Africa, Nigeria with old residual knowledge, contained it in Lagos before spreading, ignored imported Nano Silver.

Ebola Diagnosis was made in a small university town with locally invented machine in Ede, Western Nigeria. Burkina Faso scientists recently engineered a naturally occurring fungus to deliver a killer toxin to Malaria mosquitoes safely reducing their populations by more than 99%.

Lately, Imo State gave the poor free education, free food and money to the dismay of some rich folks. University of Nigeria Nssuka started Solar Energy on campus that will spread to the whole Town and beyond. If each university embarks on each project as this, Africa is ready to roll!

The irony of all the undisputed achievements in the Western Nigeria at least, compared to today is that it was based on little income from cocoa farms before the curse of oil income in Nigeria. It is a classic case in point that all the money in the world cannot make you rich if you do not know how to manage it. An African proverb says: a basket cannot retain water, no matter how much is poured into it. Money miss road O, no be small!

Usually, Africans come back home. From the day a student leaves to study abroad, village people were always counting. After four years they would expect his return with a degree. So, they would gather at the parent’s house to inquire if he was alright. One of the parents might inform them that the student decided on his Master’s degree before coming home. If that was the case, the village people would feel relieved.

Village people would then expect most students to come back home after 6 years. The parents better had a good explanation after, might be for a PhD degree. The reason was they would like to know if he has gotten lost, had become the Mayor of London or he had encountered some unfortunate circumstances. It was very rare to see an African that had not flunked staying back in Europe or America after qualification.

The oil curse brought out the worst in Nigeria creating a class of voracious looters and the greatest number of poor people in the whole wide world. Yet, African leaders always make promises that give rosy blueprints they have hardly kept while our population and basic needs explode. They take no responsibility for failures, little plan for the present and none for future.

Our youths have resigned, accepted strange fate and even use poverty, paucity of ideas and innovation for reasons to escape reality as economic refugees out of the Continent. They say, when backed to the wall, instead of fighting back, melt into the wall, ask for visa to any foreign country. New slave traders have emerged as agents selling European/Arab countries to youths.

The International appointments that are the dream jobs of Africans are less desirable to the Americans and Europeans in their countries. These jobs are only sought, after their locally desired jobs or after retirement in those countries. Yet, Africans would die for these jobs. Pity.

Not even Herbert Macaulay, Nkrumah, Azikiwe, Ekoli and Awo could have predicted the present predicament of our youths in Africa.