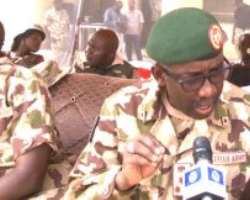 The Nigerian Army has reacted to the reports of recent attacks by Boko Haram insurgents on some communities and military bases in the north-eastern part of the country.

The General Officer Commanding 7 Division of the Army, Brigadier General Abdulmalik Bulama, responded during an exclusive interview with Channels Television on Wednesday.

Brigadier General Bulama, who did not deny the attacks, described them as mere publicity stunts of the insurgents to stay relevant by attacking targets to keep them in the news.

He, however, insisted that the military was winning the war against the terrorists, despite attacks targeted at soft targets and the military bases.

According to the GOC, this is evident by the reclaimed territories and offensive against the insurgents by the military in the last four years.

He said, The war against terrorism is not a war that you can clinically finish within a given minute or a week or a day; so it is that understanding that will tell you.

But like I always say, you need to weigh it against where we were especially from 2015 till today.

The pre-2015, virtually every part of Borno State was under the hold of the Boko Haram but today, can we say it is so? Bulama questioned.

Brigadier General Bulama also dismissed reports of dislodgement of military bases as fake news, propaganda and an exaggeration of the reality on the ground.

He spoke to Channels Television in Dikwa during a visit to the 22 Brigade where troops were hosted to a Sallah get together by the Chief of Army Staff, Lieutenant General Tukur Buratai.

Buratai was represented at the event by the Head of Logistics of the Army Headquarters, Major General Enobong Okon.

In the last 72 hours, there had been reports of insurgents attacking local communities and two military bases at Delwa in Damboa Local Government Area (LGA), and another in Marte LGA of Borno State.