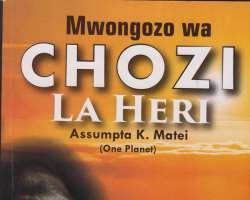 Imagine teaching a book like Love in times of Cholera by Gabriel Marquez, Season of Anomie by Wole Soyinka, Achebe’s Anthills of the Savannah, Tayie’s Ghana must Go, Arundhati’s God of Small things, Rushdie’s Midnight’s Children or Toni Morrison’s Tar Baby to form three Students. I believe this cannot be a good experience. Unfortunately, this is what is happening to the current form three and form four students preparing for Kenya certificate of secondary education. Their Kiswahili set-book for prose is Chozi la Heri by Assumpta Matei.This book is complex above intellectual preparedness for most of form three and form four students. The un-preparedness is due to tender age of the learners and as well as poverty of critical reading culture among the Kenya’s junior secondary scholars. The fact that this book is written in Kiswahili does not make it simple enough for early literature learners. Careful reading of this book readily confirms the fact that there is no reliable method of teaching literature that will help in the communication of the key messages and central literary values inherent in this book to the leaners so callow as the ones we obviously have in the third and fourth years of our secondary schools in Kenya.

The book, Chozi la Heri is less than two hundred pages, published by One-Planet Publishers, in Nairobi. It deals with complex post-modern themes like politics of gender, politics of feminism, post-colonial political mediocrity in Africa, failure of objectivity among the media in political reporting, political culture of never ending flawed presidential election results, climate refugees, ethno-sociology of fragmented land ownership, political violence, politically instigated negative ethnicity, corruption and Christian realism, illusive curse of poverty, historical failure of the Western ideologies to liberate Africa from political and economic challenges, social deconstructivism, and very many other social-economic perspectives of postmodern Africa like globalization, forced migration, un-employment and old-age poverty as well as the snobbish mannerism of self-righteousness among the political class.

Any keen reader of this book will not fail to discern that the book was basically a creative spark that came out as a literary reaction by the author to the post-election violence that took place in Kenya during the 2007-2008 general elections, but it is abysmally rich in styles. The book mainly uses metaphysical narrative approach to expose despair in the lives of the victims of political violence as well as the wretched lives of those rendered permanent victims of man-made poverty-cum-social quagmire through the well-entrenched political culture of social and economic exclusion in Kenya. The author uses all types of uncanny literary styles in the book, ranging from Dickensian-like news-reporting in the Hard Times and Great Expectations to the polyphonic writing in more than two languages , spiritually instigated fatalism, politically founded determinism, foreshadowing and non-chronological presentation of historical events as well as the concurrent use of drama, prose and poetry making the book the first of its kind in poly-genre of Kiswahili literature. The age-long literary styles like polylingualism, proverbializing, allegorizing, satirizing and minting of complex adages as well as intricate syntax are evidently put forth along-side attention arresting neologies on each and every page. The poly-genre attempt to use drama, poetry and prose at the same time in the book does not even hinder the author from flexible play with neology of Kiswahili and para-Kiswahili words.

Assumpta Matei, the author, must be an active student of Edward Said’s Orientalism, Ngugi’s Globalectics and Gavitir Spivak’s concept of subaltern cultures in the global dynamics of the North-South Cultural relations. This is evident in the simplicity which the author enjoys when dealing with question of the Chinese and the Western powers in Africa. More effective is the author’s use of literary onomastics, a semiotic effort to give Swahili names to the characters in the book by ensuring that the names humorously symbolize and signify the social and political roles of the characters in the society, a society that is a sub-structure to the book.

They are these complex concepts in the book that make me to argue that Chozi la Heri is fit for college consumptions in the departments of political science, sociology, literature and anthropology, Journalism, film and Linguistics but not to be forced down the unseasoned and untrained intellectual throats of the beginners in the world of literature and intellectual inquiry.