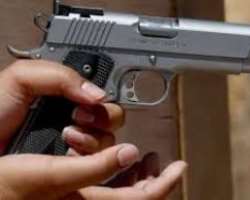 A man caught inside a church with a fully loaded pistol, is presently explaining to the police what led to such a bizarre act.

Police have detained the man, said to be a Burkinabe caught with a foreign pistol at a crowded Catholic Church in Hamile in the Upper West Region, Ghana, on Sunday.

Police say the man, whose name has not been released, could not explain why he had the gun on him.

The gun was loaded with two rounds of ammunition, police reveal.

He told the police it was his first time at the church since he moved to the town six weeks ago.

“When he was asked why he brought a foreign pistol to the church, he couldn't give any tangible answer. He said he has been in Hamile in the past six weeks and today [Sunday] was the first time he was attending church.

“The pistol was in his pocket and part of it was exposed so somebody sitting behind him saw the exposed part of the pistol and that was how he was detected,” DCOP Buah-Appiah told Joy News.

The man told police he had come to Hamile to farm.
He has been detained at the Police District Headquarters in Jirapa in the Upper West Region as investigations continue.

Ghana is on high alert following terror attacks on its neighbours.

Authorities are tightening security at Ghana's border as a Salafi-Jihadist group based in Burkina Faso attacked residents in February.

The militants on February 15, 2019, killed four Burkinabe customs officers at a checkpoint at Nohao near the Ghana border and burnt three vehicles. They also killed a Spanish priest.

The security situation in Burkina Faso, Ghana's neighbour to the north, remains fluid as thousands of Burkinabes throng Ghanaian villages over unrests.

The Africa Center for Security and Intelligence Studies (ACSIS) has also issued a security alert that the Salafi-Jihadist group has been moving in and out of Ghana through the border with Burkina Faso over the past months.

Meanwhile, the Accra Metropolitan Archbishop of the Catholic Church has said the church is on high alert to avert a potential attack by extremists.

Most Reverend John Bonaventure Kwofie revealed Thursday that the Accra Archdiocese has already engaged the Inspector-General of Police, David Asante-Apeatu and the police administration to put together a robust strategy to protect worshippers on Sundays.

“Security has become a big issue today with what happened in Sri Lanka and what's happening in Burkina Faso. Since it's coming closer to us, we are now standing alert to face this security threat that is coming up,” he said.