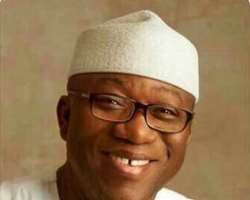 Group (PDP-NNMG) has said that the Governors of Ekiti and Ondo States,

Kayode Fayemi and Rotimi Akeredolu should be ashamed of the deplorable

state of the Ikere Ekiti to Akure road.
The group noted that; “with the rehabilitation and dualisation of the

Ado to Ikere section of the road by the Ayo Fayose led PDP government,

nothing should have stopped the Ondo State governor in particular from

for in 2018.”
The PDP-NNMG accused the APC federal government of totally neglecting

the road despite that budgetary provision was made for its

reconstruction in 2015 by the PDP government of Dr. Goodluck Jonathan.

In a statement made available to newsmen on Sunday, Ekiti State

Coordinator of the PDP-NNMG, Bola Agboola said "Ikere-Akure Road has

us."
The Ekiti PDP-NNMG feels strongly that the affinity of Dr. Kayode

manipulations but also in area of infra-structural development via

Describing the road as the worst interstate road in Nigeria, the group

said allowing Ikere/Akure Road to deteriorate that much without any

height of wickedness occasioned by the disconnect between a people and

her supposed leaders.
It said “it is appalling that despite that Governor Fayemi uses the

road regularly, he has not deemed it necessary to impress it upon his

friend, Governor Akeredolu to give attention to the Ondo State section

of the road, which has almost become impassable.
"There is no gainsaying that the Fayose administration did so well in

fixing Ado/Ikere axis of the road through quality dualization even

when it belongs to the federal government. This road has suffered

enormous neglect from previous administrations that held sway in Ondo

State.
"Whereas the strategic nature of Ikere/Akure road to the economy of

Ekiti people can never be over emphasized, the quality time commuters

also not be over flogged.
"For close to a year now, Dr. Kayode Fayemi has doubled as the

Minister and Governor of Ekiti State, we are aware of his influence in

the Buhari administration, we hereby call on him to without further

shape.
"As much as cynics may want to argue that this road in question

belongs to the Federal government, Buhari does not ply it, it is our

people that suffer the brunt and we say enough is enough.”