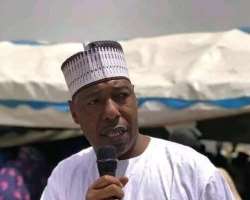 Borno State Governor, Prof. Babagana Umara Zulum' s first official engagement as the 14th executive governor of borno state after being sworn in on the 29th May 2019 outside Maiduguri, was a visit to Gwoza Local Governennt Area of the state where he inspected a collapsed bridge at Liman Kara that connects Borno and Adamawa States as well as the neighboring country of Cameron Republic.

Prof Babagana who was accompanied on the visit by the GOC 7 Div, Nigeria Army, Major Gen. Abdulmalik Bulama Biu and other officials, promised to reconstruct the federal government trunk 'A' road from Pulka to Liman kara including the collapsed bridge that serves as a link between Borno, Adamawa and Cameron Republic.

In his words of appreciation, the GOC, 7 Diviaion, Major Gen. Abdulmalik Bulama Biu, said if this road is repaired, it will definitely ease vehicular movement and military patrol on the road as the road is one of the major challenges of the Nigerian military operating in the area.

Gov Zulum was also at the palace of the Emirs of Gwoza , Alh. Mohammed Shehu Idrissa Timta where he was greatly applauded by the emir.

The governor promised to reconstruct the road from Pulka to Liman kara, build and equip their schools, provide drainage facilities and ensure that farming activities takes full effect in the local government area

He said: " I will ensure that security is beefed up to protect farmers in their farms."

According to Prof Babagana, the state government has so many things for the people of Gwoza Local Government Council but will not unfold them now but assured them that before the end of his tenure, he will reconstruct the road from Pulka to kKirawa.

The governor also promised to provide all the basic needs of the people and to His Royal Highness if he decides to come and stay with his people in Gwoza even before thie Eid el Fitri sallah.

The Emir, Alh. Mohammad Shehu Idirisa Timta, was full of gratitude to the governor for choosing Gwoza Local Government Council as his first official engagement outside Maiduguri, the state capital.

According to the emir, Gwoza people will forever remain grateful to him and assured the governor that his people will fully support him and pray for him to succeed in his endeavours

He appealed to the governor to however provide drainage system in Gwoza town and help beeff up security during the raining season so that farmers could go to their farms without fear.

The Emir added that he will personally come and leave in Gwoza town and will equally farm very soon.

The royal father said, about 80% of the people of Gwoza are agrarian farmers and with proper security network, Gwoza people will comfortably feed themselves and provide food security to other Nigerians.