Apc Members Must Remain Resolute In Their Belief - Madumere

Says The Party Will Bounce Back
By Uche Oneuchekwa 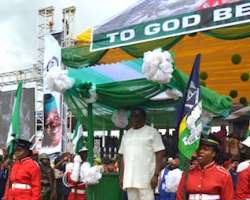 The immediate past Deputy Governor of Imo State, Prince Eze Madumere, has told the supporters and entire members of All Progressives Congress to remain resolute in their avowed belief in the programmes and agenda of the party for the state and Nigeria at large as enshrined in its manifesto, saying that the party remains the cynosure of all eyes both in Nigeria and in the world.

He said this while fielding questions from newsmen on the fate of the party in the state shortly after performing a necessary constitutional duty at the inauguration ceremony of the Governor of Imo State at Dan Anyiam stadium, defiling Okorocha's plot of pulling a spoiler stunt. Immediate Deputy Governor, Prince Eze Madumere in a warm embrace with his successor, Hon. Engr. Gerald Irina at the inaugural and Swearing-in ceremony of the Rt. Hon. Emeka Ihedioha and his Deputy, at Dan Anyiam Stadium, Owerri

In his explanation, he averred that it is true that the party may be down at the moment following its inability to win in the last 2019 governorship election, but the party will bounce back in no distant time. He reiterated his stance that the party did not lose election but the emperor who wanted to covert the state to a family estate.

"The derailment from the the people oriented principles, philosophy and democratic ideals of the party by the former leader of the party cost the party its supposed victory in the last election. We should put this behind us and forge ahead because I know the best approach is not to continue in blame game but to restrategize as a constructive momentary opposition. I want to call on our members to remain resolute in their belief in the party. I am a man of principle and where I say I am is where I am. I am an unrepentant APC. They should tow the same path and I believe they have more to gain than to lose. Everybody is aware that Imo people were never against APC but the emperor who tried to take away their freedom and dignity. It was one fight they fought with their lives and in the course of this we became casualties. You know that everything in sight was sacrificed by Ndi Imo to redeemed their battered ego, freedom and dignity." On his presence at Dan Anyiam stadium to open the guard of honour to pave way to Ihedioha's swearing-in, he said; "I do no play such politics of bitterness. APC, which I am a leader does not play such dirty and bitter politics. Do you want people to suffer because of politics of self. We are in politics to better the lots of our people. You have seen the social enhancement policies of our government. It was a duty the real enemy of the state would have performed but because of the fear of being lynched and his Pharaoic posture, believing he could scuttle the event to continue to suffer our people. By my exposure, education and conscience, that is not for me. Our President, Mohammad Buhari is not known for such impunity and we must live by example. There are places to challenge election issues not with the people." Prince Madumere performing Constitutional role of taking salute during a parade to formally pass the baton of leadership to the incoming Government led by Rt. Hon. Emeka Ihedioha....

However, Madumere reiterated his position to work with other leaders to ensure the party remain focused, even as he revealed that some leaders are already doing that at their various constituencies.