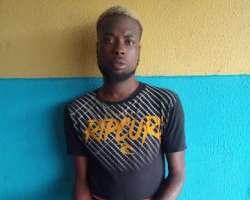 The Police in Ogun state succeeded in preventing some hoodlums from disrupting the inauguration of the new Governor in Ogun State, Prince Dr Dapo Abiodun.

The police detectives thwarted the plot to disrupt the inauguration ceremony at MKO Abiola Stadium and one of the hoodlums, Oluwaseun Fakoyejo was arrested with gun at the venue while others escaped.

The Police Public Relations Officer for the Ogun State Police Command, Abimbola Oyeyemi said the plot to disrupt the inauguration ceremony failed because of the proactive move by police detectives acting on intelligence.

The PPRO told The Nigerian Voice that the arrest of the suspect followed an intelligence report at the disposal of the command that some hoodlums are going to be at the stadium purposely to foment trouble which made the Police to be more vigilant during the ceremony.

He said "The operatives deployed at the venue got information about the hoodlums fomenting trouble and threatening people with dangerous weapons."

"The operatives swiftly moved in and succeeded in arresting one of the hoodlums while others escaped."

Oyeyemi said one locally made single barrel pistol and four live cartridges were recovered from the suspect.

The Commissioner of Police, CP Bashir Makama ordered a thorough investigation of the incident and mandated police detectives to ensure the arrest of the fleeing hoodlums to face the full wrath of the law.